“Around 15 years ago I didn’t know much about sake. People would ask me about it, and I would make it up. But then I felt as though I had done a bad thing—I felt guilty. Now, my job is to educate.”

Fumi Nakatani is MASU’s restaurant manager and is often donned sake master—albeit because he is New Zealand’s only qualified sake master. Restaurant and Café sat down with Nakatani to learn about sake, and how this iconic Japanese beverage stands in today’s dining scene.

“The biggest misconception is that sake has a high alcohol content, maybe 50 or 40 percent. Sake generally only has around 15 to 16 percent—it’s very similar to wine.” Sake is generally made up of rice, water, and koji (a type of mould). Some sakes also contain different amounts of distilled alcohol. Typically, cheaper sakes might contain higher percentages, as extra alcohol can be added to increase the volume of sake produced. “On the outside of the rice grain there are lipids and proteins, so they polish it.”

“On the sake bottle, there is a percentage. Lots of people mistake this for the alcohol content, but this is, in fact, the polishing ratio—what’s left of the grain. 50 percent means that 50 percent of the rice has been polished away.”

“I think that the world record is one percent, meaning that 99 percent of the rice has been polished away, so it’s very pure; almost like water. Sake is classified by the polishing ratio—the smaller the rice grain, the more aromatic and pure the sake is. I used to have a seven percent sake here which I would sell at $1500 a bottle. One night, a billionaire came in here and bought me out. I had a chance to try it, and it was so watery.”

“Any sake that has been polished to 70 percent or higher is considered futsu-shu (standard sake). Anything above this is premium. In standard sake, they can add a lot of distilled alcohol, which is made of sugar cane, or corn, and then they can dilute it and make a big volume. It tastes a lot like alcohol, and they can then add lots of sweets, like sugar, and amino acids/MSG. For premium, however, they can’t add anything apart from a tiny bit of alcohol; it’s just water, rice, and koji.”

“For a long time, New Zealand only really had standard sake. About 10 to 15 years ago, there was a hot sake boom in New Zealand. During this time, I would sell a lot of this, because New Zealanders didn’t really know what ‘good’ sake was, including me. This added to the perception of sake—headaches, hangovers, sake bombs, etc.” 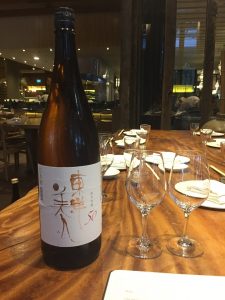 “I actually used to be a welder—a very hard job. Then I left and opened a bar, even though I didn’t know anything about it. I just wanted to do it. I was then recommended a working holiday, so I came to New Zealand and fell in love, instantly.”

“Some people call me a sake guru, but I only know a little bit. Sake history is ancient, so I don’t really know anything in the big picture. There are so many unknown things about sake—so it interests me.”

“In the early 1900s [Japan] had over 5000 sake breweries. Now, there are only around 1500. In New Zealand, there is only one sake brewery, Zenkuro. It’s very new, only operating for around three years. Compared to Japanese breweries, who have been doing it for a very long time, it’s really good sake.” 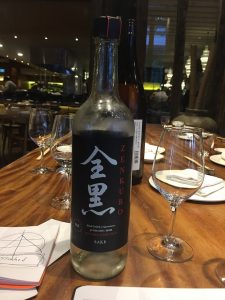 Different types of sake get their flavours from precise adjustments in the brewing process. “Sake can be aged; sake can be unpasteurized, the rice in sake can be polished more or less, there are some that come cloudy or ones that aren’t refrigerated,” as Nakatani explained. “Ageing, for instance, means that the sake becomes a little browner. The taste becomes more peppery, and less fruity, almost. The fruity flavoured sakes get their flavour from the yeast. To produce different flavours, the temperature of the yeast is closely controlled; it then needs to be brought down to around seven to eight degrees so that it is stressed and ‘begins shivering’. Then, we don’t allow the yeast too much food (sugar), and they produce a substance called ester. From this process, we can create all sorts of different flavours, melon, green apple, banana, etc.”

What, then, goes into a good sake we asked Nakatani. “The key is temperature control, what style of koji, the quality of the rice itself, the polishing ratio, the pH of the water, the mineral content, the sugar content of the fermentation liquid, etc. There are like a thousand different styles and tastes.”

“Four years ago I went to Melbourne to do the Wine & Spirits Education Trust (WSET) Sake Course. After completing that, I felt as though I wanted everyone to know about premium sake and help everyone to become educated [on sake] so that they may enjoy it more.”

“I feel as though [sake] is a little bit of my identity. 20 years ago, I didn’t have it—I would just drink beers and whiskies—but now I want to get it back.”

Having such an esteemed restaurant manager, it was interesting to learn about how the sake works with MASU’s menus and MASU clientele. “There is a saying, ‘Sake doesn’t fight with any food.’ But there are subtle differences between Western palates and Japanese palates. And I have figured out why,” Nakatani said with a smile. “Sake is made of rice. So in Japan, when you eat chicken teriyaki, you eat rice. When you eat salmon sashimi with rice, of course [sake] matches. However, you never eat something with grape juice—it just doesn’t match up. Therefore, the matching culture in Europe is different.” MASU’s sake offerings are extensive; they have over 60 different types. If you are looking to enjoy a range of sakes, you can get a flight, either a Kokomi (four sakes) or a Koharu (six sakes).

“The Japanese population is shrinking. So the sake industry cannot survive unless they look outside of Japan. They need to think about international tastes and trends. The decline in sake drinking in Japan is because of the amount of choice that now floods in from Western countries. Beers, wines, whiskies, etc. In the olden days, sake breweries were close to towns so that people had easy access to the sake.” Nakatani went on to explain that sake wasn’t necessarily losing popularity; it was more about the increase in competition from other liquors and beverages.

“Outside of Japan, some of the biggest sake drinking nations are the United States, China, Hong Kong, Brazil and Korea. But my ultimate goal is to have lots of sakes on New Zealand supermarket shelves.”

“There are lots of Japanese restaurants around Auckland, but people are still largely uneducated when it comes to sake. Some Japanese people, for instance, don't know anything about sake, but they will know about Pinot Noir from Central Otago.”

Our time with Fumi Nakatani at MASU allowed us a brief insight into the world of sake—the art of sake—a drink as symbolic of the Japanese nation as rugby is for New Zealand. 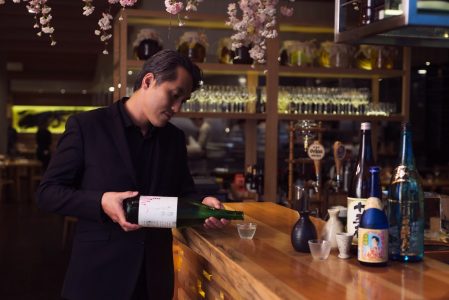 Nakatani runs a sake club at MASU where you can learn about and taste a variety of Japanese Sakes accompanied by a small selection of the Chef’s favourite dishes. To find out more, visit info@masu.co.nz.