Eight culinary students from the Wellington region have competed for a place in the National Secondary Schools Culinary Competition (NSSCC) Grand Final. The regional final was held at WelTec, Cuba Street in Wellington.

Congratulations to Jasmine Beech from Wellington Trades Academy, regional winner for Wellington. Jasmine turned up the heat in the kitchen, having to prepare, cook and plate, two individually plated portions of an entrée within 60 minutes. The entrée had to contain fresh New Zealand grown broccoli as the main component of the dish.

Her winning dish, Broccoli and Cheese Croquettes, Smoked Mascarpone, Pickles and Beets. Judges’ comments include ‘A dish worthy to be served in any restaurant. Great concept and execution. Beautiful use of ingredients.’ 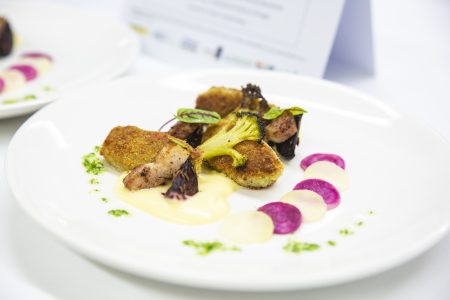 Each regional winner will choose a teammate and compete in the NSSCC Grand Final against seven other regional teams on 8th September in Auckland.

The competition is proudly sponsored by 5+ A Day, Bidfood, Moffat, Service IQ, Southern Hospitality, Waitoa Chicken, and Vegetables.co.nz, all of whom are supporting the industry’s upcoming best student chefs.

The CADT promotes culinary arts in New Zealand as a career option for those interested in developing their professional experience through culinary competitions. Working with sponsors, local councils, government bodies and communities, the CADT encourages, fosters and oversees New Zealand culinary talent, and the creation of relationships within the industry, with an overall focus on healthy eating.