Practising two meals to perfection during the COVID-19 lockdown has paid off for Kiwi chef, Sam Heaven who has taken out the title of Beef + Lamb's Young Ambassador Chef for 2021 with dishes that delivered a taste of his Hawke's Bay home. 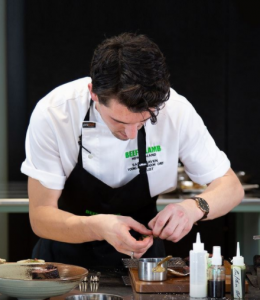 Despite winning over the judges and beating several other promising chefs, the self-described perfectionist said he could have improved on the dishes he served.

“I had to make adjustments on the day. I'm not used to cooking on induction [so] I had to adjust how I was cooking. After I got home, I thought, ‘I could have done this a little bit differently’,” expressed Heaven.

The 23-year-old is based in Auckland, where he works as part of the events and private functions team at the Park Hyatt hotel. Already well-regarded in the foodservice industry, he is no stranger to chef competitions. His boundary-pushing approach to cooking takes inspiration from Nordic cuisine but his focus is on highlighting New Zealand produce on the plate.

Heaven's first dish was a wagyu steak aged in koji and kombu then cooked in cultured butter, bone marrow, onion, and herbs, and seasoned with seawater. The second, a beeswax-aged lamb saddle cooked in lacto-fermented tomato and fallen leaves, lamb and caviar tart, and lamb nasturtium tea.

“It's taken me a while to come up with these dishes, [with] a lot of trial and error. It does come down to a lot of your time. A lot of people would be going home after work chilling out, watching Netflix. I'm still here at 9pm prepping, practising and refining,” he noted.

At the end of last year, Heaven also took out the coveted Nestlé Golden Chefs Hat Award in the first year it was open to New Zealand residents.

The Port and Eagle gastro-pub in Kaiapoi is sick of repeated vandalism and thievery. The pub opened on March 1st and has already been…