Heineken announced that it has entered into an implementation agreement with Distell Group Holdings Ltd (Distell), Namibia Breweries Ltd (NBL) and Ohlthaver & List Group Companies (O&L) to integrate their respective and relevant businesses in Southern Africa into one enlarged company (the Transaction).

The Transaction will be implemented through a number of simultaneous and inter-conditional steps, and will involve:

Upon completion, Heineken will contribute these acquired assets plus its 75 percent directly owned shareholding in HSA and certain other fully owned export operations in Africa, into an unlisted public holiday company (referred to as Newco). Heineken will own a minimum of 65 percent of Newco, with the remainder held by Distell shareholders who elect to reinvest. 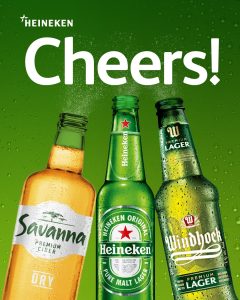 The Transaction will create a Southern Africa champion and an important gateway to Africa, the next frontier of growth.

It will also strengthen its number two position in South Africa, the largest market in Africa, with a unique multi-category portfolio.

Heineken's control of the beer market leader in Namibia will provide premiumisation and other growth opportunities while benefiting from cost efficiencies as part of the Heineken group.

The Transaction will also combine route-to-markets and portfolios in export countries and explore wider opportunities to grow the acquired cider and beer brands.

Heineken is committed to be a partner for growth in Southern Africa and aims to make a positive impact on the environment, social sustainability, and responsible consumption in the communities in which it operates.

Headquartered in South Africa, the new business is ambitious for growth and will engage positively and proactively with stakeholders on measures demonstrating its long-term commitment to the region. This will include ongoing investment in the business, employment, localisation and supplier development, talent development, and contribution to the economic development of the region.

Newco will implement Heineken's Brew a Better World 2030 commitments, which include an ambitious agenda aligned to the UN Sustainable Development Goals to achieve carbon neutrality, waste reduction, water efficiency and address harmful use of alcohol. This will include projects and partnerships with proven impact on behavioural change and reducing alcohol-related harm, alongside investment in responsible consumption campaigns and ensuring that consumers always have a choice through broadening the availability of zero alcohol beverages.