Robert Harris, together with its loyal customers, has raised more than $333,000 for Breast Cancer Foundation New Zealand by sponsoring its annual Pink Ribbon Breakfast campaign for the last eight years.

This year, the network of cafes hosted New Zealand’s biggest ever all-day breakfast on May 14th donating the value of every coffee sold with breakfast to BCFNZ. And on May 21st, Robert Harris teams in Auckland and Christchurch held a Pink Ribbon Breakfast fundraiser inviting the local business community along to share in the fun and enjoy a coffee or two.

The team cranked up the BBQ and cooked up 30kg’s of bacon, buttered some 400 slices of bread for Bacon Buttys and served just as many barista-made Robert Harris coffees for a small donation raising over $1,500 to help Breast Cancer Foundation NZ. 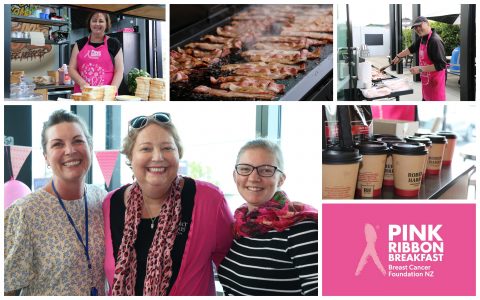 Robert Harris franchise manager David Thackery noted that the partnership is a reflection of the community spirit of the coffee brand’s founder, Robert Harris.

“During the 1950s, Harris was heavily involved in community work and today, the Robert Harris brand supports Breast Cancer Foundation as a way of honouring his legacy. We’re really proud to have been able to ‘come together for good’ for eight years and contribute to such a worthy cause.”

Ah-Leen Rayner, chief executive of Breast Cancer Foundation NZ added how grateful the charity was for the support Robert Harris has given over the years.

“The incredible amount they’ve raised is making a real difference in our work to reach zero deaths from breast cancer,” she said.

“The proceeds raised by Robert Harris help us to be there for women going through breast cancer, invest in research to find better and more treatments, and educate New Zealanders about the importance of early detection.”