In an age where the number of meat-alternatives are increasing daily, the future of meat is cloudy. And soon, in case meat producers weren’t scrutinised over enough, we could soon witness the introduction of cultured meat—meat produced in a lab. Paddock to plate is one thing, but lab to table? Although cultured meat is the same as regular meat on a cellular level, one must ask whether or not the future looks, in any way, like a world dominated by meat-crafting scientists, and jobless farmers.

How does lab-grown meat actually work, though? To start, a tissue sample is taken from a living animal. From that tissue sample, stem cells can be isolated. Stem cells are then fed a nutrient-dense serum, encouraging stem cell multiplication. Once a mass of cells is formed, it is supplied with proteins that prompt the cells to differentiate into muscle and fat cells. After some time in a cultivator, a mass of cells resembling raw mincemeat can be harvested and prepared. Roughly paraphrasing from Prince Hamlet, “To eat, or not to eat, that is the question.”

Regardless of the ethical question of eating engineered food, lab-grown meat presents a middle of the line option for one of the leading debates in the foodservice industry—is it okay to continue consuming and farming the same amount of meat, or are we driving our planet into the ground. Additionally, lab-grown meat offers people opposed to slaughter, but still keen to eat ‘meat’, another option. Does this then mean that it is competition for plant-based alternatives or another weapon in the meat-alternative arsenal?

There are several reasons why lab-grown meat could influence the culinary world. Two of these such reasons are the ethics involved and the reduction of a range of adverse environmental impacts. Ethically, lab-grown meat offers a prime solution to animal slaughter. Animals need not die in the procurement of their flesh, yet we are still able to reap the benefits of their ‘consumption’. While the science doesn’t indicate that lab-grown meat will be better for us nutritionally, as the technology and product development continues, there is a good chance that things like nutritional content will be able to be manipulated so that the final product is ‘good for you’. It is believed that saturated fatty acids, for example, could be replaced with omega-3 fatty acids, instead. Although the nutritional benefits are still a work in progress, those that are sympathetic to animal rights issues will find that lab-grown meat offers a desirable alternative.

Environmentally speaking, lab-grown meat has the potential to address some of the foodservice industry’s most significant challenges—carbon neutrality and waste. The United Nations estimates that livestock contributes to approximately 15 percent of global gas emissions. On top of this, it is no secret that animal farming requires tons of water, produces toxins that can pollute waterways, and continues to chew into the remainder of the earth’s arable lands. Mark Post, professor of vascular physiology at Maastricht University, and the first person in the world to produce a lab-grown burger said, “If we can replace the majority of livestock meat production with cultured meat production, there would likely be enormous environmental benefits. Around 70 percent of the Amazon rainforest has already been cleared for grazing. It is projected that cultured meat production will use 99 percent less land, which would potentially allow for vast areas to be reforested.” While lab-grown meat has the potential to impact the planet positively, the question of acceptance and availability must be asked.

Lab-grown meat has not broken through to widespread commercial availability, but it has come a long way. In 2013, when Post created the first lab-grown burger, it cost around $325,000. Just two years later, it cost $11. Although developments have been made, there are still challenges involved with the science, as well. Impossible Foods, the curator of plant-based meat-alternatives such as the Impossible Burger, have lofty expectations of having replacements for every animal-based foods on the market by 2035. However, logistically, financially, and scientifically, this goal remains to be seen. Furthermore, until widespread production becomes a reality, it is hard to accurately predict how beneficial lab-grown versus regular agricultural production will be for the environment, as doubts have been cast over the validity of its envisioned ‘clean and green’ image. While the future could very well contain lab-grown meat, the keyword remains ‘future’. 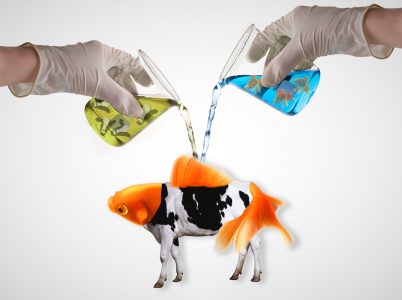 Meet some of the lab-grown meat producers…

Finless Foods – A company promoting ‘real fish’, without the need for fishing or farming. According to their website, Finless Foods is “A food startup working toward a world where everyone has access to healthy, delectable seafood, without the environmental devastation or the health hazards of traditional fishing and aquatic farming.”

JUST – “At current rates, production of meat and seafood around the world will double to 1.2 trillion pounds by 2050. Our planet cannot afford to supply the water, fuel, pesticides, and fertiliser that industrialised animal production requires. It can’t afford the polluted water or the biodiversity loss. It can’t afford the moral inconsistencies,” reads the JUST website. JUST originally produced vegan-alternatives to animal-based products, egg products, mayonnaise dressings and cookie doughs—they’ve taken that to the next step with their lab-grown meat developments.

Remedy Kombucha is the real deal! It is naturally fermented and chock-full of live cultures and organic acids that are good for the gut…