Restaurant and Café Magazine sat down with Jamie Cashmore, co-founder of twiice, an edible coffee cup company, to find out more about the wonderful world of cookie-based crockery.

“My dad and I are the co-founders,” said Cashmore. “He’s on the production side of things, and I’m more sales and marketing. He’s an ex-architect, so he has the engineering mind and manages all the processes. Over the years we’ve been working on our cups. Sometimes things wouldn’t be going perfectly, or as we had hoped, so we’d get a little discouraged. But then, a couple of weeks later, we’d come back and want to try again, and be like, ‘let’s do it’.”

The twiice story begins in 2015, where the inspiration for an edible coffee cup came about during a swim at Okahu Bay. twiice is a family-run business that draws on a wide range of talents to create an incredible product sure to shake up the café scene.

Introducing the twiice cup—an edible cup that is resistant enough to hold a cup of coffee, and tasty enough to house a scoop or two of your favourite ice cream. “We started with what we thought would be the right recipe, and we’ve just played with it and spoken to bakers and suppliers to get the right ingredients. It’s been a bit of a challenge, but we are pretty much there.”

“Our test is the boiling water test. We put boiling water in the cup and leave it for 24 hours. When we come back, it shouldn’t be busted or broken, and you should still be able to pick it up. It might be a little soft after 24 hours, but if you bought one from a café, and brought it back and placed it next to your law papers, or something important, it’s not going to break and spill all over them.”

“We’re in one café at the moment, Freaky—we don’t quite have the wholesale packaging yet. But soon we will, and then we’ll be ready to supply to anyone who wants.”

“We’ve turned our kitchen at home into a commercial kitchen; it’s all official and verified. We’ll eventually need to move to a bigger facility, but for now, it’s okay. Both of our wives are helping out, too. My wife is a graphic designer, so she is helping with all the branding and packaging, as well as working with photographers.”

“I am more of a ‘go, go, go’ kind of person, and it’s great to have her to pull me back and talk about things that are working with the brand, and things that aren’t.”

twiice had recently opened for private pre-orders when we spoke, and it was met with a popular response. “Even just being on social media, people have been approaching us—cafés, wholesalers, etc. But we are just waiting until we can properly supply before we start reaching out majorly.”

We asked about the challenges involved with getting a new and novel product up and running. “It certainly has been interesting. I guess the trickiest thing for us has been that there aren’t many people doing the same thing. There are a few overseas, but the coffee culture in Australasia is so different, and no one has really been here before. Things like wholesale, pricing and packaging, that sort of thing has been quite tricky because no one wants to be responsible for sending 50 cups through if they’re all going to end up broken. Doing something different is always going to be challenging, something we expected from the outset, but it’s just about pushing through.”

It also became quickly evident that sustainability was at the forefront of operations for twiice. “The packaging was quite hard to get right. If we put the cups into a vacuum-sealed plastic bag, it would defeat the purpose of having an organic cup. So we made sure to find a bag that was home compostable. Our packaging is all internationally accredited compostable material, as well. And should anyone ever throw a cup out into the street, the birds would eat it before it could decompose. This is all a part of the brand—a part of the story—and that’s how we want to be portrayed. And it’s timely—there is a big push at the moment for products that are sustainable and good for the environment.”

twiice is still a relatively young company, fast approaching their desired capacity for production and distribution. Currently, Cashmore doesn’t work fulltime on twiice, but that is something he hopes will change. “We just need to be able to sell a lot of cups so that we can pay for all the salaries. But I think that we’ll able to do that. Hopefully, we can expand around the country, too. The goal for that is around two to three months, just based on who has hit us up so far. We’ve also had enquiries from Australia, too, so I guess that is somewhere to look as well.”

On top of expansion, product development is also on the cards for twiice. “Currently the cup isn’t gluten-free or vegan, but once the product gets out, and we can expand a little bit, we’ll definitely look into other options. We’ve started working on a gluten-free cup, as it’s a little easier than a vegan one—baking without egg as a binder is tricky. Also, I would love to work with Whittakers Chocolate, for example, and see if we can get some of their chocolate around the top or something like that. But the possibilities are endless. Who knows, maybe we’ll be doing edible cutlery next.”

Cashmore noted that although from an outside perspective it may have looked as though everything was running smoothly, getting the business on its feet had not been without challenges. “We had started off trying to make the cups just with what we had—basic kitchen equipment. We quickly realised that we would need to invent a machine that could help us, and that is where my dad really came into play. He designed a machine and programmed how it worked, and that was massive for us. He just has that mind, and the patience. And from here, it’ll be going out to market and seeing whether people like it. And hopefully soon it’ll become the norm, and people will get into it.” 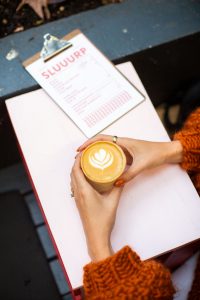 Lukas Paravicini, the chief operating officer of Fonterra’s Consumer & Foodservice business, has resigned. Paravicini is set to leave the co-operative in January 2019…