A chef by trade and a traveller by passion, that's how chef Torsten Glaser of Peach's Hot Chicken in Panmure described himself to Restaurant & Cafe magazine.

With a love of creativity and self-proclaimed obsession with gardening, Glaser has settled comfortably into his chosen New Zealand home. "New Zealand is my fourth and favourite country to live and work," explained Glaser, who is in his 14th year of cheffing.

Back in Germany, Glaser left home reasonably young for a three-year stint of vocational training in a hotel combined with college, where he pursued a degree in cooking; this was followed by some time in the German navy, working in a gastro-pub in Wales and Italian restaurants in Vancouver, Canada before finally arriving on New Zealand shores. It was that passion for travelling that spurred Glaser's idea to become a chef.

"The opportunity to travel the world and to be able to live and work wherever I wanted to, paired with a strong interest in cooking from a young age. Yes, my mum, as well as Anthony Bourdain, had a strong influence on my decision to become a chef." 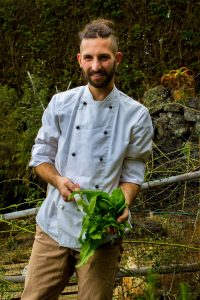 Glaser's close friend and owner of Peach's Hot Chicken, Alex George, asked him one day if he wanted to join the team. "I saw the potential that the company had, back then it was a food truck with the headquarters in a football club." Glaser decided it was worth spending the next few years frying chicken.

Of course, there are no typical days in hospitality. Still, Glaser's usually starts with prep work, making sauces, spice blends, side dishes, butchering a whole chicken, receiving deliveries and getting ready for the day's lunch service. It is not uncommon for Peach's Hot Chicken to have a queue from the till to the side-walk seconds after the doors open.

Peach's Hot Chicken serves what is called Nashville hot chicken. Nashville hot chicken originated in Nashville, Tennessee in the 1970s, it's fried chicken tossed in a spice blend and served on white bread with pickles. It is hugely popular in the United States with hundreds of restaurants doing their version. At certain places, people wait hours to get their hands on it; a tradition Peach's has continued to uphold. 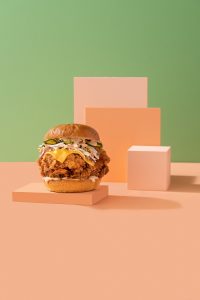 At Peach's, the chicken is prepared using a generations-old method belonging to owner Alex George's grandmother. You know when there's a secret recipe involved that it's going to be good. Once you have selected your spice level: mild, mild plus, medium, hot, or Holy Cluck, you can then choose to have it served on either a piece of squishy white bread and topped with pickles, inside a tender brioche bun as a burger, or atop fluffy Belgian waffles. 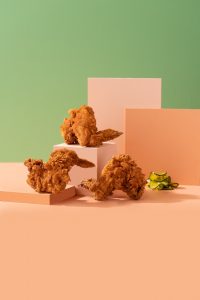 The restaurant opened just a few months ago and was incredibly busy from day one. "We are constantly changing up little bits and pieces to make it more efficient, and we have ongoing discussions of what we can make better, for the customers as well as for us."

Unfortunately, along with the rest of New Zealand, the team at Peach's is currently in lockdown, Glaser explained that the restaurant has managed to build a strong team over the past months which is one of its greatest assets, having a strong bond between colleagues.

The lockdown hasn't stopped Glaser and the team looking to the future of Peach's either, with Glaser excited about new possibilities. "Creating merchandise like Peach's pickles, Peach's spice mix and Peach's aioli for your home cooking are some of the ideas and projects that will happen in the future."

It is this strong bond between the team that has helped shape Peach's success and is one of the more rewarding aspects of Glaser's job. "I think the success that comes with building up a company is the greatest reward for me and the whole team currently."

"Overall the greatest reward is the joy you bring to people by opening their mind while stimulating their taste buds, their eye's and their sense of smell, especially when serving them a cuisine that they have never experienced before."

When he's not in the kitchen, Glaser is out in nature, whether on a multi-day hike or in his garden, he loves to try new things that are almost always connected to food and cooking.

"I'm obsessed with gardening and growing ingredients of any kind. I make fruit wine, kombucha and other fermented foods and drinks. I turned my backyard in a micro-farm, with fruit trees, garden beds and pet chickens (for eggs only of course, not the deep fryer). I love to be creative in my own ways; prickly pear and hibiscus wine is one of my recent successes. I love New Zealand's outdoors and multi-day hikes are among my favourite activities." 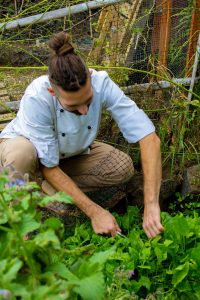 Glaser confessed he has too many future goals to possibly name them all, and that some should stay secret for now, but he is focussed on the many opportunities New Zealand has to offer.

"I do plan to build up my own company, and New Zealand is the country to make it happen," noted Glaser. "All I can tell you is this is not the last time you will read about me."

Gone are the days of white porcelain plates and boring table spreads. Today’s restaurant is fitted out with the latest in tableware style, combining…