The National Secondary Schools Culinary Challenge has come to an exciting conclusion this year, with a remarkable level of culinary skills showcased throughout the finale.

The Grand Final took place between eight teams from across the country, with one team nudging out the rest for first place. This year’s winners were Ilisa Folau and Alyssa King, from Te Awamutu College, who were tutored by Will Cawkwell. Their entrée that had to contain fresh New Zealand-grown carrots was a dukkah crusted carrot falafel with vibrant carrot puree, pickled carrot, smoked feta and tahini sauce. Main courses had to have at least three fresh New Zealand grown vegetables, one of which had to be kumara, parsnips or yams, and the protein component had to be Waitoa free-range chicken breast (skin on, and bone-in). Te Awamutu’s main was pancetta-wrapped chicken breast stuffed with black garlic, blackened leek, kumara puree, a trio of winter greens, with a chicken and kimchi wonton. Four portions of each of these had to be prepared and cooked within an hour and a half by the duo. Mark Wylie, head judge of the competition, and national account sales manager at Southern Hospitality, said that the Te Awamutu team worked incredibly well together. “They presented great looking dishes that tasted amazing.” 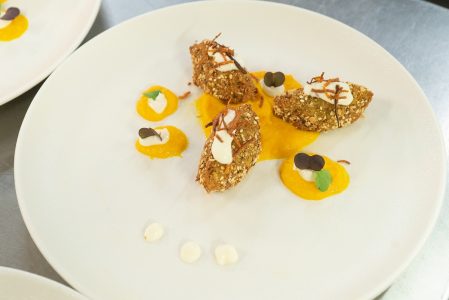 “Although it sounds clichéd, the standard improves every year,” continued Wylie. “We’re always amazed at the professionalism and discipline that all contestants show. The students are always well-coached, and always bring innovative ideas, at industry standards, to the competition.”

Winning team coach Will Cawkwell said, “I am incredibly proud of our team and how they performed at the competition on Tuesday. Ilisa and Alyssa have been incredible to work with throughout this journey. I was impressed with their composure and skill during the competition but also their integrity and sincerity upon winning.”

Along with the winner’s announcement, the NSSCC also recognised outstanding work in the culinary arts through starter packs, which were aimed at students graduating school and looking to get into the hospitality industry. In addition to the students’ hard work being acknowledged and rewarded, the teachers were also recognised.

“The NSSCC was started to offer students who are interested in hospitality a pathway into the industry. After the competition, we take the students on a ‘Culinary Journey’, in which we take them to various industry-relevant talks and showcases. We hope that the NSSCC promotes culinary art, and exposes the best of New Zealand’s up and coming talent to the industry.”

“I felt privileged to be one of the seven teams competing in the NSSCC,” said winning duo Folau and King. “We are absolutely thrilled to have been a part of and won the Grand Final. We want to thank the Culinary Arts Development Trust for all of the hard work that has led to such an amazing event. We would also like to thank all of the sponsors who also helped make this happen.” 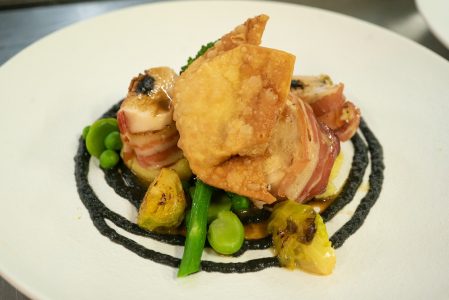