A new digital kitchen from PepsiCo has been launched in the United States. Called Pep’s Place, it is designed to encourage consumers to experiment with matching foods with various Pepsi beverages. 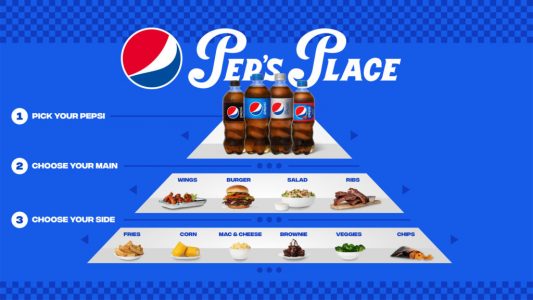 “For years we have known that Pepsi is the perfect complement to a variety of foods,” said Todd Kaplan, VP of marketing at Pepsi. “But even though consumers know that food tastes Better With Pepsi, they often still forget to order a beverage with their favourite meals.

“With the launch of Pep’s Place, we have designed a new ‘fast beverage’ restaurant delivery concept that features a menu and experience literally built around the idea of what foods go best with Pepsi, allowing consumers at home to fully optimise their meals,” he said.

Pep’s Place will trade for a month, supported by eight television commercials broadcast nationwide. The company noted that the ads were filmed without “unrealistic, idealistic perfection” of food, instead depicting “the celebration of unapologetic love of foods like juicy, drippy cheeseburgers, topping-heavy hot dogs, and pizzas with the extra-long cheese pull”.

The US government shutdown, which extends into its 30th day, has meant that routine restaurant inspections are being put on hold, reducing consumer confidence…