Boasting one of the busiest and longest continually run upmarket restaurants on the Coromandel Peninsula, the land and building at Cooks Beach has been put on the market.

The property which overlooks Mercury Bay houses the popular year-round dining establishment KaiZen at Go Vino as its ground-floor tenant, with a three-bedroom residential dwelling situated on the upper level of the premises. 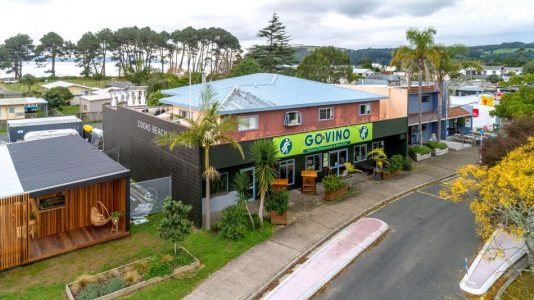 The original Go Vino dining art-gallery décor concept was first developed in Hamilton in 2003, branching out several years later from a wine shop into a tapas eatery.

The venue has just rebranded itself as KaiZen at Go Vino, but under the former name of Go Vino the bar and eatery opened its Cooks Beach location, just 100 metres from the beach, in 2007 and since then it has become an integral part of the Cooks Beach community.

The prominent two-storey property at 19 Captain Cook Road, located in the Cooks Beach compact retail strip, is being jointly marketed for sale at auction on July 8 through Bayleys Hamilton and Bayleys Whitianga.

The ground floor hospitality space occupied by KaiZen at Go Vino is on a lease running through to later this year with two further three-year rights of renewal – generating annual rental of $25,250 plus GST and operating expenses. Meanwhile, the apartment has been let for $220 a week. This is soon to increase to $500 a week.

This year, Waitangi Day falls on Saturday 6 February and is observed on that day or Monday 8 February. Here are seven items you…