Executive Chef, Christopher Will, has been at MASU for a year and a half. Although he started as Sous-Chef, he quickly became Executive Chef when the opportunity to move forward arose.

What is immediately confronting about MASU as you walk in is the sheer size. Restaurant and Café sat down with Will after a lunch rush at MASU, and the ambience was still electric. “There are about 38 chefs and stewards at MASU,” Will said. “It’s one of the bigger SKYCITY teams, and one of the bigger multinational teams, too. We are made up of Koreans, Indians, Japanese, Kiwis, South Africans, Chinese, Indonesian, and Pakistanis, etc. etc. It means that there is a lot of different culture and upbringings that are mixing—then obviously, I have my own way.”

Will explained the importance of having a common goal in mind when there are a lot of people in one kitchen. “As long as you’re firm and everyone knows what you want to achieve, it shouldn’t be a problem.” Having said that, working in such a multinational kitchen comes with its difficulties. “The language gap can sometimes be a pain. If you’re tired and you mumble, and no one can understand, it can get frustrating. But if there is one common goal, it’s pretty easy to achieve what we want.”

MASU specialises in Japanese robata style cooking. “Robata cooking is cooking over charcoal. The charcoal is compressed and hollow to produce intense heat. All of our main food comes off the robata grill, except for one dish. This includes our meat, fish, veggies, starters, etc.” A single seating at MASU can sit 127 people, and as Will explained, this can sometimes turn two to three times on a busy night. “It’s hot, it’s loud, and it’s busy…” laughed Will, “and generally in service, I won’t look like the nicest person to talk to, but it’s okay.” 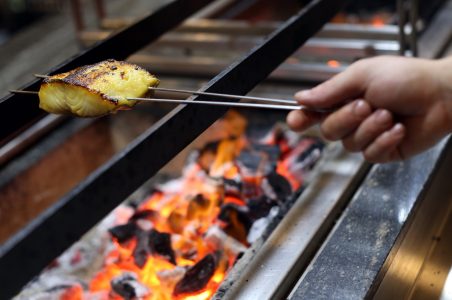 Will discussed a problem that he sees in the restaurant industry at the moment. “There is a major chef shortage for all sorts of restaurants, not just Japanese. This means that it can be hard to find chefs, especially for something specific, like what we need. We have to reach out to overseas to bring talent into New Zealand and SKYCITY. When we do this, though, we are recruiting to invest. We want them to be here for at least three years, at SKYCITY.”

Will was proud to discuss the sustainability and provenance of MASU’s ingredients. “The majority of our produce is locally supplied and sourced. We do import some things, like our Kagoshima Wagyu A5 beef—a prime example of our high-end product. We also import our Mexican Chūtoro and Ōtoro. Apart from those, all of our fish is received daily from around New Zealand. Our vegetables are also grown and sourced locally.” On top of this, Will described how they are aiming to rid MASU of single-use plastic as soon as possible.

Restaurant and Café were interested in finding out about how Kiwi diners received MASU’s unique menu offerings, as well as how well Kiwi produce mixes with Japanese cooking techniques. Will said, “Quality is the most important thing. And from a Japanese perspective, it’s all about the sauces and the cures and the marinades. So that’s where we connect the two and find a bit of synergy.” In terms of the MASU client, Will said that it is widely varied. “We get a lot of tourists, and businesspeople, yes, but a large proportion are local Kiwis. The food is clean and fresh, and that fits in well with the Kiwi lifestyle.” 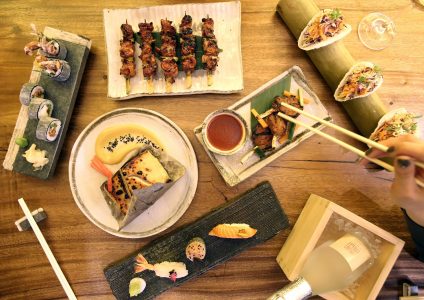 MASU has an extensive menu setup. They essentially have three different dinner menus, not to mention the lunch and dessert menu. “We have the á la carte menu, which provides for the casual diner. It doesn’t change too often, maybe every six to eight months—but it features consumer favourites. Then, there is also the Tokusen and Shomi menus. The Shomi is a quick set which we usually do for bigger groups, while the Tokusen provides for the diehard ‘foodies’. The Tokusen is our premium menu; where myself and the team get to explore on a culinary level. We want to push it to a two-hat to three-hat level, as far as we can. This menu changes every three to four months.”

Development in the chefing world comes with its challenges, according to Will. “When you’re continuously busy, it can be hard to be creative—I think this is something that every chef struggles with. When I came here, I had an aim, and I wanted to put my foot down and get things moving. I hoped that I could bring new creativity and a new personality who could lead the kitchen in a different way. That’s what we’ve been slowly working on; but how do you balance an incredibly busy restaurant, a big team, and making sure that we are still moving forward and being fresh in the marketplace with new ideas?”

Our time with Christopher Will at MASU was a great insight into the challenges that come with running an exceptional and busy restaurant. 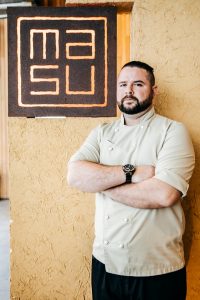