The New Zealand Brewing industry has come a long way in the last 10 to 15 years. There has been unprecedented growth in craft and small breweries and an increased focus on developing a vast range of styles and flavours. But while we often recognise the positive intangible elements of ‘having more beers to choose from’, we don’t always look at what this means in terms of the significant contribution the industry makes to New Zealand’s economy.

The Brewers Association of New Zealand contracted the New Zealand Institute of Economic Research (NZIER) to analyse the New Zealand Brewing industry and its contribution to the New Zealand economy for the year to March 2018. This report highlighted the significant financial contribution the industry makes in New Zealand, benefitting not only the producers, but also, supply chain and government tax revenue. What follows is a brief summary of some of the findings.

From the grain to the glass, the New Zealand brewing industry was worth $2.3 billion in the year to March 2018. In this value chain, the industry contributes $640 million in value added (GDP). It also provides a significant contribution to government through $315 million in excise tax and collects $271 million in GST ($149 million from on-licences and $121 million from off-licences).

New Zealand brewers purchase $593 million of intermediate products from New Zealand suppliers, this includes ingredients, transport, kegs and packaging. The New Zealand brewing industry uses $15 million of hops, with the majority of these grown in the Tasman region. One-third of the Tasman produced hops go into domestic production, the rest are exported to markets in the USA, Great Britain and Europe. Grains and malts make up $27 million of the ingredient costs, with other ingredients (including yeast) making up $14 million 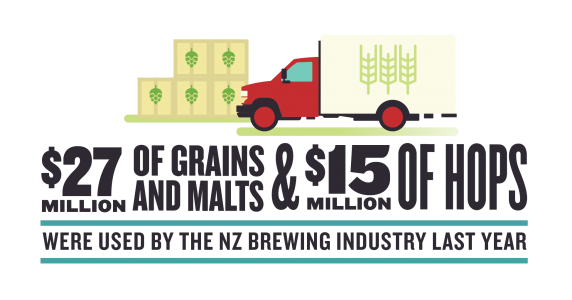 Ten percent of beer produced in New Zealand is exported ($41 million), compared to 70 percent of wine. In addition, international tourists account for approximately $242 million in beer sales which, while not officially included in the statistics, can be considered exports. This is unsurprising as New Zealand has a growing reputation internationally as a beer tourism destination. As highlighted below, there is more variety on offer to visitors, which comes from the growth in the industry. 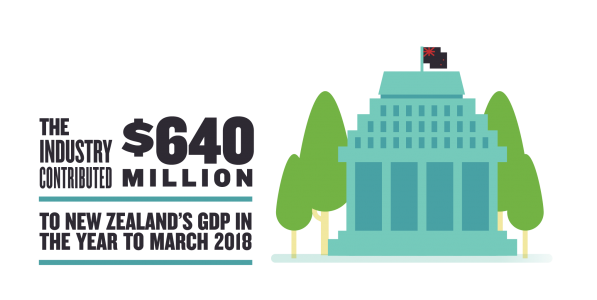 Both craft beer and lighter options (mid strength (1.15-3.5 percent), low alcohol (under 1.15 percent), low-carb and flavoured) have seen a combined growth of 13 percent per annum since 2016. Representing 10 percent and 7 percent of sales respectively in 2018. The ‘Lagers of the World’ segment (e.g. Heineken or Stella Artois) have seen a 6 percent increase since 2016 and currently represent 32 percent of supermarket beer sales. Pale ales dominate the craft beer market in traditional liquor retailing and supermarkets. In 2018, just under half of all craft beer sales in traditional liquor retailing and supermarkets were either a pale ale or an India pale ale.

Craft beer has been growing strongly since 2008. With 218 breweries, New Zealand has more breweries per capita (4.56) than similarly established beer markets – the United Kingdom (3.04), Australia (2.10) and the United States (1.96). The growth in craft beer has seen an explosion of independent breweries, increasing 16 percent per year since 2008.

However, overall consumption of beer and alcohol in general has declined. Last year’s Ministry of Health – Annual Household Survey showed about four in five adults (78.7 percent) consumed alcohol in the past year (2017/18). This is down from 79.3 percent in the 2016/17 year and overall down from 83.6 percent in 2006/7, a 4.9 percent decline to date. 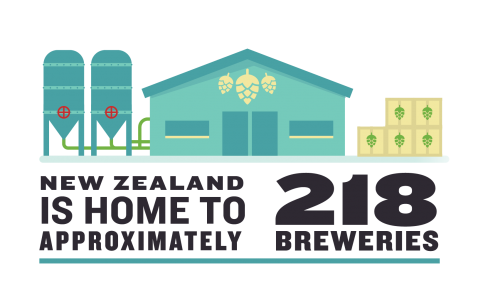 This is not necessarily negative. The industry has seen a shift in the last few years from volume to value, with consumers looking to spend more on less. We believe this is a positive trend reflecting a growing move towards moderation, and a more mature and responsible drinking culture.

This all adds up to, a snapshot of what the brewing industry contributes economically. It is by no means every measure and will likely change again in a short time. There is still a lack of quality data in areas such as employment and the turnover and profitability of some of the smaller breweries. But it is still important for us to recognise the economic value this industry makes.

Discussions on long-term sustainability and market saturation will need to take place at some stage. The per capita breweries figures indicate we are near the top of the breweries per person list internationally, even in a declining consumption environment.”.

The Brewers Association applauds all those involved in the New Zealand brewing industry for their continued innovation and commitment to producing high quality products. Those businesses and individuals who make it their day to day mission to improve the category and open consumers to new and exciting experiences, make the sector what it is today. 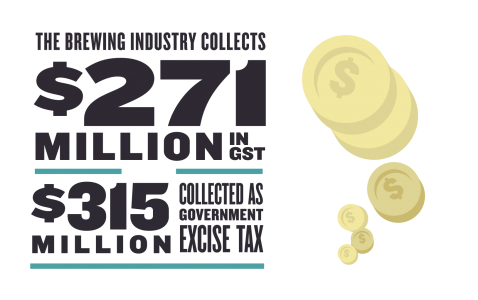 Every step on Barry O’Neill’s journey has been a move up the career ladder. “Each role has been taken with personal and professional growth…