Rimutaka Prison holds around 1000 men – almost two percent of Upper Hutt’s population. Half an hour up State Highway 2 from central Wellington, each year the prison attracts more than 200 eager diners for the most popular event on the Visa Wellington On A Plate calendar – Gate to Plate, a fine-dining experience run by the men behind the wire. 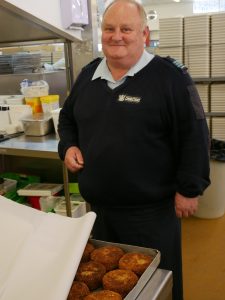 Mark Gill is the man in charge of the kitchen programme at Rimutaka Prison. He’s been running the kitchen for years, coming from a catering background before getting involved in Corrections.

According to the Department of Corrections, over 8,000 meals are prepared for prisoners every day. The menu, which has been certified by qualified dieticians and caters for prisoner’s dietary needs, is on a 28-day rotation. The meals themselves are pretty straightforward.

“I think there are about seven chicken dishes in the four weeks, along with mince, sausages, meatloaf, fish on a Friday, a pie on a Sunday,” Gill said. “It’s basic stuff.”

As an example, the basic breakfast includes three pieces of toast, some Weet-Bix and milk, sugar, jam and margarine. Gill is currently in the process of instituting a new menu. The new menus will feature more vegetables, although it might not be the most popular move.

“Most of the guys in here, they’ll scrape the vegetables off the plate and eat the meat and potatoes. Not all of them, but most of them.”

The nearby Arohata Women’s Prison has a slightly different menu – more emphasis on salad, as well as hot lunches.

The Department of Corrections has a national procurement agreement with Bidfood – what Gill admits is a “pretty big shopping list.” Over 250 chickens are required to feed the men, and all fruit and vegetables are from local producers.

As it is in any kitchen, there are considerations to be made.

“We’ve got vegetarians and vegans, gluten-free and dairy-free – there are something like 170 special diets,” Gill said. Everything is low fat and low sodium and while there are deep fryers in the kitchen, but they’re mainly used for function catering.

Strangely enough, up until the introduction of the Food Act 2014 (which, despite the name, wasn’t fully implemented until March this year), government organisations were exempt from any food safety requirements. That has since changed, and Gill proudly announces that the prison kitchen has passed with flying colours at each inspection.

“We developed a plan about ten years ago, because we knew it was coming. There were some changes with the new legislation but we just had AsureQuality go through the whole country, and we did pretty well.”

The kitchen doesn’t just prepare prison meals – the team often caters for events run by government departments, so the men learn skills beyond chilli mince and quartered chickens. Dishes for these events range from pastries and fresh bread to canapes like venison with red wine honey and yuzu koshu mayonnaise, and coconut pannacotta with watermelon and sriracha.

Inside the kitchen at Rimutaka Prison

In terms of the working environment, the men are treated simply as employees. While they remain in full view of the guardroom, they are left to get their tasks done with minimal interference.

“We want to create an environment that is as similar to a workplace as possible,” Gill said. “We trust them to get on with their work, and they just do it. We don’t swear at them, we don’t lie to them – we treat them with the same respect we expect ourselves.”

The exception is found in the industrial fridge, where items like eggs and yoghurt are kept in a cage to prevent theft.

“Of course, there’s a bit of theft but we’re not too worried,” Gill said. “There’s no more going on here than there would be in any other workplace of forty people.”

While there’s always a waiting list to join the kitchen, there are a few criteria a prisoner must fit before he can join the team. If someone wants to get involved there must be a referral from Head Corrections, before Gill goes to interview them.

“We don’t take any active gang members,” he said. “We’ll take them if they want to get out, or if they were prospects but while they’re active they’re no good to us. If they’re just going to go back into the gang environment once they’ve been released, it’s a waste of our time and resources.”

A key part of the kitchen, and indeed the entire corrections system, is that the prisoners can finish a prison sentence with more than they started. Rimutaka Prison allows workers to meet NZQA standards and qualify under ServiceIQ.

“The boys are keen to do this,” Gill explained. Although they haven’t had a level four student in about a year, there is a steady stream of prisoners wanting to achieve levels two and three.

“We’ve got a number of guys who are out working in the local community who have come through here, started with nothing, and got their qualification. Then we’ve also got guys coming in here who have worked in the industry who have never had any formal recognition, so we try to give them something they can show to a future employer to prove that they can do the job.”

A transient workforce is a significant challenge facing Gill – prisoners can be transferred at a moment’s notice, so Gill doesn’t generally take anyone on unless they’re guaranteed to be there for at least six months, in order to gain a few unit standards. Even for those who don’t go into the foodservice industry, a qualification is proof that they can knuckle down and get things done. Having a qualification, foodservice or otherwise, can raise a wage by up to 60 cents an hour on the outside, and providing prisoners with the best chance upon their release is in keeping with the key tenet of rehabilitation. 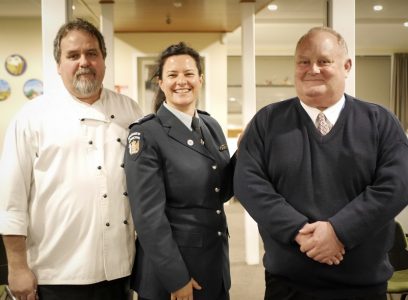 Of course, despite all the good work that goes on out of public view, the main thing for which the Rimutaka Prison kitchen is known is its immensely popular event held as part of Visa Wellington On A Plate. The event has been running for the last six years and has proven so popular that tickets are allocated through a random ballot – 240 tickets over three nights. Guests are given a tour of the prison, followed by canapes and a three-course dinner.

While the idea came from within Corrections, it gained traction with the support of chef Martin Bosley, head chef at a number of award-winning restaurants. Bosley came to the prison and trained the men in the art of fine dining – he would later joke that the first time he came he had to explain what a mushroom was, but now finds himself listening to the men discuss the best way to create a peach gel.

“The first year it was just Martin, but the next year he invited Rex Morgan and Shaun Clouston,” Gill explained. Last year the prisoners received help from Shepherd Elliot from Shepherd and Monique Fiso of Hiakai.

As part of the event, the prisoners and the staff are dressed the same.

“When the public come, they don’t know who is who. We’re trying to show them that these guys could be anyone. We had one lady ask a member of staff how much longer he had to serve, and someone else asked a prisoner what it’s like to deal with the prisoners. It’s exactly what we want.”

Gill puts a lot of the event’s popularity down to curiosity.

“People like to come and have a look around the prison. The food is great, but it’s the whole experience which is what makes it so popular.”

Mason*, a prisoner, has worked the VWOAP event for the last three years. He spent one year as a waiter and two years behind the scenes in the kitchen. He was clear on which one he preferred.

Mason worked in IT before entering Rimutaka, where he has made the most of all the work programmes available. He worked in the print shop – each guest at Gate to Plate receives a cookbook, designed and bound on-site – before moving to the kitchen and gaining further qualifications. He’s a keen cook and, having recently discovered walnut oil while reading a magazine, is keen to incorporate it into a recipe for the external catering menu.

While he said he was unlikely to work in hospitality after his release, he said he was grateful for the opportunities that the kitchen had given him.

“It’s pretty daunting,” he said of the Gate to Plate event. “There are a lot of sleepless nights leading up to it, worried that you haven’t planned well enough, but when it comes out it’s awesome.”

Although Gill claims that the only reason the event goes ahead is because he was “stupid enough to say yes”, it’s easy to tell that he is proud of the programme and the popularity of the Visa Wellington On A Plate event. He points out a note and a photo on the whiteboard in the baking room.

“That’s a thank you from Paula Bennett, back when she was deputy Prime Minister,” he explained. “She seemed to have fun. You hear a lot of bad things about our prisons, but there’s a lot of good that goes on as well.”

*Names have been changed.