Gradimir Mirkov, director of Salash Delicatessan, started by explaining the origins of the name Salash. “Salash, when translated from Serbian, is something like a ranch. It’s a protected place that has your animals, fruit trees, etc. We would move out there in spring, and we’d work there throughout spring and summer. In autumn we would prepare the salami, and preserved vegetables so that during the winter we could move back to the city. Salash is about self-sustenance.”

But to Mirkov, and his family, Salash is not just an idyllic concept or memory nowadays, it’s everyday life. Salash Delicatessan produces a range of traditionally prepared meats—from fresh chorizo, to dry salamis and dry-cured meats. “Everything is done exactly how we did it in Serbia—we don’t use any chemicals or preservatives, or nitrates, nothing like that—just meats and spices.” Mirkov wasn’t the first of his kin to arrive in New Zealand, however. His uncle came out in 1995, followed by his brother and his brother’s wife in 1999. “We applied for a visa in 2003, and finally arrived in 2009—mum, dad and I.” Mirkov got to work right away, initially transforming his garage into a proper production area to start manufacturing his meats. For the last nine years, he has been in his Miami Parade premises in Onehunga. Now, Salash produce a range of products, including pancetta, prosciutto, bresaola, salami, bachka, and chorizo. 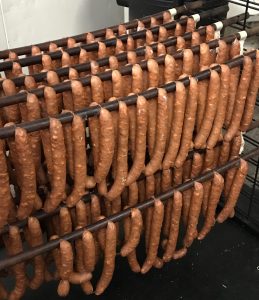 “We use local ingredients mostly, but we also import a few cuts of meat for a specific taste. The pigs are different back in Europe, for instance, and have different diets, so the end product that we’re used to ends up tasting different.” But Mirkov said that it’s not just the ingredients that differ, but also the processes that are involved. “In New Zealand, a lot of people are still using preservatives, something that has its own taste. This often tends to overpower other flavours, giving a lot of the salami a similar taste. We were the first company in New Zealand to be approved by MPI to be able to not use preservatives in our products. Up until that, it had been mandatory.”

When it comes to Salash’s product, there is a tangible difference in quality. The effort that is put into every stick is present not just in the commitment and belief Mirkov has in his product, but it’s also through the extensive labour that goes into every stick of salami. “Our products take a lot of time to produce. Even the smaller salami takes at least seven to eight weeks; the larger ones take up to 20 weeks. Our prosciutto takes a minimum of twelve months to dry, as well. This is partly why we introduced a few smaller cuts of meat, like the loin prosciutto, that takes around three to four months to be ready.” The fact remains that Salash values quality and tradition over mass production, though, something that Mirkov doesn’t want to change. “This is what differentiates us from other producers. It’s a different style, and a different taste and people seem to like it.”

“We really started with nothing, you know? We came here with nothing but our knives and our hand crank filler that my grandad had used—and we’re here now.” Mirkov explained the importance of keeping things largely how they are, as well. “We are not looking to implement big changes or anything. Perhaps we’ll try a few subtle variations in the flavour, and perhaps new sizes, but we like to keep it traditional.” There has to be something special in the product, considering Mirkov and his family still happily consume their products daily. “Our products are the perfect snack, they’re ideal for kids lunchboxes, great for a table while you’re sat around with your friends, and you can add it to almost any cooking. We often encourage our customers to pick it up like a habit, as we have.”

Now with two young boys, Mirkov would love to be able to set up for his family here. Married to a Mexican wife, Mirkov’s boys are certainly growing up with a range of cultures to draw from—many flavours of salami and chorizo to experiment with. “Our dream would be to one day have some land that we could set up our production on, with a place to live on, too. Something that we could use as self-sustenance. But for now, it’s about family life. We just want to have a nice life and make our product. You can’t ask for much more, especially with a family business.” 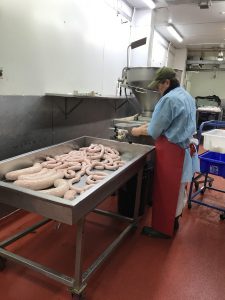 William Mordido, owner and creative director of pop-up restaurant Buko, has announced a collaboration with the iconic Whittaker’s chocolate brand for a special Valentine’s…