New Zealand chefs Sam Heaven (Auckland) and Jamie Jackson (Christchurch) battle it out against each other and top young chefs from across Australia in the 2020 virtual grand finals of the Nestlé Golden Chef’s Hat Award. 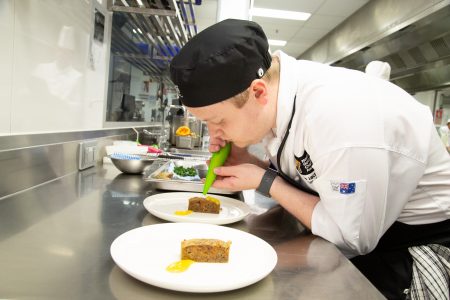 The pair took to the kitchens at Le Cordon Bleu New Zealand in Wellington to cook and present to judges from NZChefs the three-course menus they had each created for the event. At the same time, their culinary skills and dish creations were live-streamed to a panel of judges in Australia. 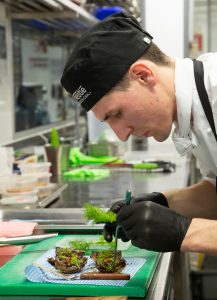 Sam and Jamie, who represented the North Island and South Island respectively, were part of a top 10 line-up of competitors from across New Zealand and Australia.

In a year like no other, Australia’s longest-running culinary competition which hit New Zealand shores earlier this year, responded with a new format to ensure that culinary talent like Sam and Jamie could still put themselves to the test and elevate their careers.

A virtual awards ceremony will be held next week where the overall winner will be announced. The 2020 Chef of the Year will be awarded an AUD$10,000 cash prize to further their culinary career.

The Nestlé Golden Chef’s Hat Award is celebrating 55 years this year and exists to offer the next generation of young chef talent a platform to accelerate their culinary careers and become the culinary leaders of tomorrow.

The Award proudly partners with NZChefs and the Australian Culinary Federation, who share in the collective vision of being dedicated to the development of young chefs and the future of the industry.