The future of the meat industry is continually debated. It seems as though we are no closer to convincing carnivorous consumers to lay off meat as we are to convincing herbivorous diners to try veal. While there perhaps isn’t an ample amount of space for collaboration between plant-based and meat-based industries, there needs to be a conversation about sharing the space. The plant versus meat production debate doesn’t often end up in agreement, but for the sake of time, we will shoot down the middle and say it’s about balance. Inevitably, this is what the future looks like, something people are going to have to get used to. While recommending a dietary plan that is wholly sustainable would be dangerous amongst a dietarily-divided audience, there is a following of meat-alternatives, and that isn’t going to vanish suddenly. Nor will it completely overtake the meat industry.

Recently, KFC in the USA announced that it was trialling plant-based chicken meat. Their new offerings included boneless wings and chicken nuggets, both made by Beyond Meat. The ‘Beyond Fried Chicken’ is said to taste and look exactly like the regular KFC, and based on the trial, KFC is expected to expand their plant-based offerings. 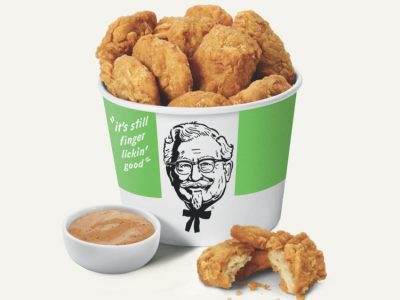 Beyond Meat have many of the most prominent players in the QSR category locked down, including Subway, who have the Beyond Meat Meatball Sub across over 650 restaurants in the USA in Canada, and Carl’s Jr., who sell a Beyond Meat meatless burger. But they are not the only players in the game. Currently, Burger King is the biggest chain across the USA who sell a plant-based meat-alternative in all of their stores. Their Impossible Whopper rolled out earlier this year, as well as White Castle offering the Impossible Slider on their menu.

In addition to the Impossible Foods and Beyond Meat offerings, there are a host of other players in the international market causing a stir. NUGGS, a start-up chicken nugget simulation, create chicken nuggets from texturised pea protein. Each nugget is said to contain twice the amount of protein of regular animal-based nuggets, and around 20 percent fewer calories than an animal-based nugget.

With chicken and red meats covered, that leaves seafood. Good Catch tuna is fish-free tuna made up of a blend of legumes and oils. The product is GMO- and gluten-free and is certified vegan. It is said that the product contains roughly the same amount of protein as proper tuna. Finless Foods produce sustainable seafood with a twist—a cell-cultured version of fish. This sort of product perhaps lies on the border of what is and isn’t meat, as the ‘meat’ is grown from cells from real fish. However, the live fish is unharmed, making it more sustainable than regular fishing. Whether or not cell-cultured meat will catch on, or whether it’s ethical practice will convince vegan consumers to try it or not is another debate. 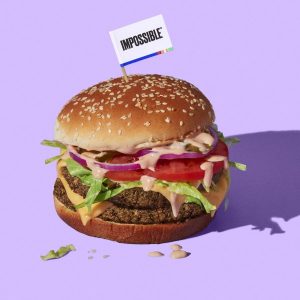 Meat-free alternatives are increasing in both diversity and demand. It seems unlikely that they would take over the regular meat industry, but given initial feedback, they are certainly here to stay. However, vegans can rejoice, as faux meats are not the only thing to consume in place of meat. There is a range of products from around the world that are used as protein supplements for a vegetarian or vegan diet. Some of these include tofu, a staple in many Asian dishes, but also a versatile and starchy additive to many different meals; tempeh, a firmer, and grainier protein than tofu, but equally as versatile; seitan, a glutenous meat-like protein made from wheat; jackfruit, a healthy and tropical fruit that has a mild taste, lending its services to a range of dishes where it can substitute meat; lentils, the age-old stand-in for meat due to their nutritional value, and ability to replicate the meat component of a meal; and finally, beans and legumes, another hearty substitution in terms of nutritional value, and value for money. While some people believe these sorts of products lead to flavourless cooking, this is a common misconception. Vegetarian and vegan meals are not synonymous with bland flavours. Modern trends mean that vegan and vegetarian options are growing faster than ever; the flavour possibilities are endless.

Meatless meat is here to stay, as are plant-based proteins. The market is growing, and so too is the demand. This means that venues that continue to provide a good range of alternative meat options will be ones that makes it in this increasingly meat-free world.