There is only one rental arrangement that makes sense during the COVID-19 shutdown that is fair to both landlord and tenant.

Implicit in leasing arrangements between landlords and tenants for shopping malls and retail precincts is the guarantee of a certain level of customer traffic that is generated through a combination of mall location, anchor tenants, retailer mix and marketing by both the mall owners and retailers.

What happens when this implicit commercial arrangement fails?

Covid-19 has resulted in massive customer traffic decline in malls and stores. This has been caused by government-mandated lockdowns, retailers’ hibernating/shuttering stores, store closures due to insolvency and shopping malls closing centres for safety and commercial reasons. Who is to blame? COVID-19 is responsible and the innocent victims, the landlords and their retail tenants, will be left to sort out the mess that ensues. The reaction of retailers has varied from withholding rent, seeking deferment until this crisis

passes, negotiating rent reductions and so on. The landlords likewise are taking varied

approaches to negotiations depending on their circumstances.

How bad is the decline? Very Bad.

Many retailers were reporting sales decline of 50 percent to 70 percent in March prior to full lockdowns being enacted, now most retailers are relying on e-commerce sales to survive.

In a New York Times Article on April 11th, 2020 titled ‘How the Virus Transformed the Way Americans Spend Their Money’ by Lauren Leatherby and David Gelles they chart Earnest Research data on credit and debit card purchases of nearly six million people in the United States for the week ending April 1st that shows a decline in spending between 30 percent and 90 percent depending on the category. 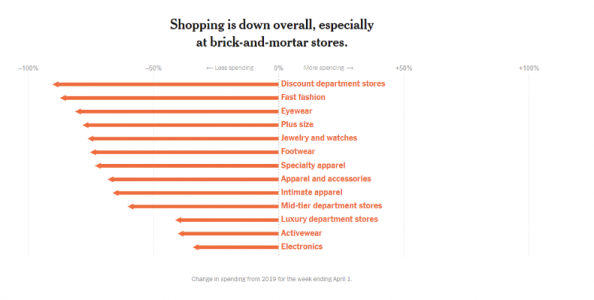 When will it get better?

Recovery will depend on when there is a vaccine developed. Current thinking is the development of a vaccine is a minimum of 12 months away to which you would be sensible to add a further 6 months for the global distribution of the vaccine.

Until a vaccine is released expect some form of social distancing to remain in place that will ratchet up when infections increase and ratchet down when infections stabilise.

Last week, BoF and McKinsey & Company released a Coronavirus Update to The State of Fashion 2020 estimating 80 percent of publicly listed fashion companies could be in distress after more than two months of store closures, for privately-held fashion retailers these estimates would be similar or worse. Retail banking analysts suggest even the best-run retailers would not be able to last longer than six months without an equity injection.

Sharemarkets and financial institutions do not have a magic wand to forecast the future so this uncertainty will weigh on capital markets and suppress investment. While sharemarkets can bounce back quickly, investment, economic activity, and consumer confidence will be a slow road back to recovery.

Next week I will revise my recent article on retail sales forecasts for the next 18 months for retailers as we are now getting better data on the impact.

Most retail lease agreements include a fixed rent component adjusted annually for inflation over a five year period. No retailer in the world would survive more than two months let alone six months if they had zero or little income coming in via the store while paying rent that typically is 20 percent to 25 percent of a normal year’s revenue.

So while legally entitled to enforce their rights the result for landlords would be to force the retailer out of business. Landlords would win the battle and lose the war, the result being multiple empty shops when centres get back to normal, loss of leverage in lease negotiations and a major decline in shareholder value or worse.

Our recommendations are that landlords and retail tenants agree to the following deal for the foreseeable future until traffic numbers into shopping malls or into stores in shopping precincts return to 2019 levels.

Who knows when customer traffic will return, it’s anyone’s guess so these arrangement incentives need both shopping malls and retailers to work together to ensure:

The key is consumer confidence that will only return if we focus on the safety of customers and employees first.

I spoke with Rob Hartman CEO of Stenton Leasing who has negotiated leases for many well know retailers across Australia and New Zealand including Lululemon, Witchery, Nespresso, Blue Illusion as well as for retailers in distress.

His view is “many of our great retailers are just hanging on, paying full rental when there is little traffic coming into the centres will push them over the edge. The only sensible arrangement that is fair to retailers and landlords alike is to pay a percentage of store revenue rather than a fixed rent until things get back to normal.”

Legally all the risk if with retail tenants to pay full rent even though COVID-19 is the cause of a dramatic decline in sales in the 2020 Calendar Year and beyond.

If landlords insist on enforcing their rights, they will send their customers (retail tenants) to the wall defeating their objective of collecting outstanding rent and keeping their malls full.

Only by landlords and retailers working together and focusing on ensuring consumers’ exposure to COVID19 is minimised while shopping in centres and stores will customer traffic increase.

By charging rent as a percentage of store sales based on 2019 Benchmark there is an equal incentive for both parties to work together and prosper. 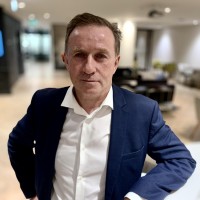 A one-stop source for information on New Zealand seafood was launched at the New Zealand Seafood Industry conference. OpenSeas is a third-party verified, broad-based…