In this four-part series, we look at reducing, reusing, and recycling in the foodservice industry. We talk to some of New Zealand's cleanest and greenest and find out what they are doing to keep themselves sustainable.

with Bird on a Wire, and The Butcher’s Son.

Reduce can mean a lot of things. In conversation with Kelly Bain, director and general manager of Bird on a Wire, we explored how reducing different aspects of operations can lead to cleaner and greener business practices. “We purchased the business from the founding members last March. This just meant that all of the systems that were in place, we carried on with—we didn’t really change anything. However, we always try and send as little to landfill as we can. Our packaging is all made from plants; it’s 100 percent compostable. We recycle all of our recyclables, and we compost all our food waste.” Much like KIND, Bain addressed the issue of education. “It’s important to ask, ‘What is actually happening with all of the packaging that we’re using?’ There are composting facilities here, so if you buy your takeaway coffee here, then you can put your cup in the appropriate bin. However, if you walk down the road as you do with a takeaway coffee, there is no compost bin. At the moment, we’re questioning what the best thing to use really is. Should we be using takeaway packaging at all?”

“What we can manage or control, sustainability is inherent in the process. Anything that’s coming in, and what it is packaged in, we try to reduce. We look towards local producers, where we work with them to make sure that we are getting produce in large quantities so that we can reduce packaging.”

“You can track along for ages, and think that you’re doing okay, but it’s important to be able to self-evaluate; it’s the little things.” In order to reduce, it is time that foodservice businesses start looking inwards, even if it’s just small steps each time. 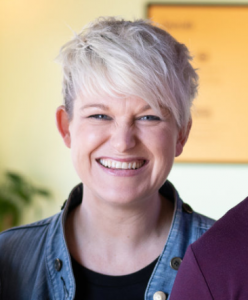 The Butcher’s Son is an entirely vegan eatery that was formed around the concept of sustainability. To Chris Kinnell, director of The Butcher’s Son, the eatery had to be “As sustainable as possible, energy efficient, have a low impact on the environment, as well as having a focus on nutrition—plant-based, specifically.” In terms of reducing waste, The Butcher’s Son has worked with their suppliers to reduce not only what they are creating, but what is happening to produce before it arrives at their doors. “We wanted to have recyclable packaging—we only spoke to suppliers that could meet these needs. As we went along, we would go back to our suppliers and encourage them to package their goods in larger, commercial-sized packaging. Sometimes food would arrive, and it would be a plastic bag inside a cardboard box; it just meant that we had extra rubbish and it was taking extra time. In some cases, we have been able to influence the suppliers. In the last year, some of them have changed the way that they package stuff, so it’s in larger containers, for example.” Inefficient reducing, reusing and recycling cannot be blamed on any one step of the supply process. While suppliers may use plastics to keep goods fresh, restaurateurs don’t want to sell anything but the highest quality product, and diners don’t want to eat something that has lost integrity or quality. While there is a growing demand amongst consumers for a reduction in waste packaging, there is still a consistent demand for the highest quality product.

“In terms of food waste, [reducing waste] is a part of the commercial reality that you have to try to achieve. It’s about portion sizes and making sure that people aren’t getting more than what they can eat. When it comes to prepping, you have to make sure that you are efficient with your ingredients.”

But the problem of reduction isn’t as simple as cutting things out; our systems need to maintain themselves within the infrastructure that we have. Kinnell said, “I don’t think that our impact on the environment is becoming any less, and I think that the education surrounding the matter is becoming more, so I can’t see the trends towards sustainability changing. It’s just going to become more normalised.” But is that enough?