Patsy Bass founded Reefton Distilling Co. in the hopes of creating jobs and attracting more visitors to the small rural town of Reefton, nestled in a valley in the West Coast’s rainforest. Community is at the core of the distillery, as many proud West Coast locals are shareholders.

As over 50 percent of the finished product, the provenance of the botanicals and the quality of the water used is what makes a great spirit for the team at Reefton. The distillery’s approach to spirits starts with what is freshly available, hoping to craft something unique to stand against the world’s best. Reefton Distilling Co. sources everything as locally as possible, foraging fresh native botanicals along with using spray-free fruit, citrus and Rata honey.

Sustainability practices are taken very seriously at the distillery and environmental stewardship is a core value. Reefton is currently looking into Carbon Zero certification, at the assessment stage of a B.Corp certification.

“All of our decisions are filtered through their impact socially, environmentally and fiscally.” 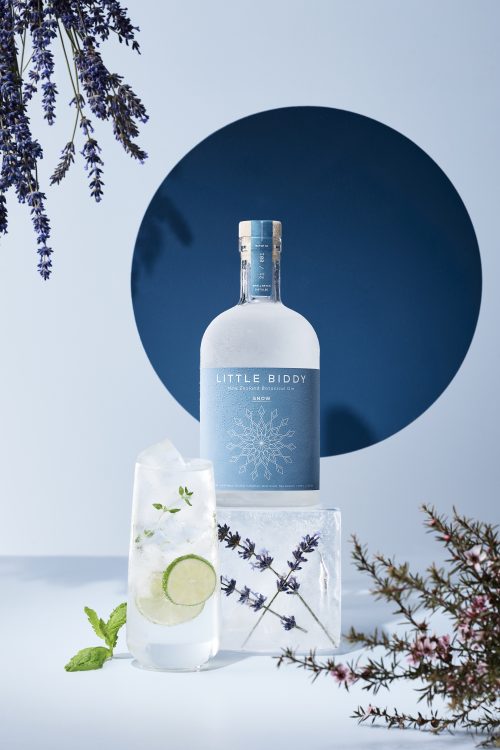 “Little Biddy Gin - Snow is, we believe, a first in New Zealand, if not the world, to use freshly foraged snow to make gin.”

Reefton’s buildings are repurposed to function as a distillery, far kinder to the environment than building new, and the team reduce, reuse and recycle wherever possible. The distillery has a closed circuit cooling system for their condenser, significantly reducing water waste. Waste water is captured and used to irrigate surrounding lands.

Previous owners of the site had stripped all topsoil and Reefton Distilling are re-generating with native botanicals, so that they themselves can forage from the garden and so visitors can see, touch and learn about the native plants.

The grain used at the distillery travels in a natural circle. From the fields in Canterbury to the West Coast where it is malted locally, the product is ground and has water added to extract the sugars, returning the remaining grain to a local farm as cow feed.

Reefton uses unvarnished and untreated caps, some products now have compostable labels and others use backing paper that is recyclable.

In an enormous endorsement to the team’s commitment and skill, Reefton Distilling Co.’s products are award-winning. At the San Francisco World Spirits Competition, the Little Biddy Gin - Classic brought home Gold. Other products have won Platinum and Consumer’s Choice Awards.

Leading the team is Angus Hay as Master Distiller and General Manager of Operations. Hay started out as an Aircraft Engineer in the Royal Navy, but upon leaving had the opportunity for a position at The Glenlivet Distillery as a Stillman. Spirits are a family business, as his stepfather was an enthusiast, collector, and worked as an electrician across multiple distilleries, while his sister had an active career in the consumer facing side of the Whisky business. Hay worked in distilleries around the globe for many years, through different phases of modernisation, automation and expansion before finding a new challenge offered at Reefton. At Reefton Distilling Co., Hay is about to start production on their Moonlight Creek Whisky.

“I was attracted to the role at Reefton Distilling Co. because of the authenticity and the gutsy nature of what they had established. The opportunity to join their journey and create what will become some of the best Whisky in the world - from a region in which Single Malt distilling is a fledgling industry - was the driver for me.”

With so many varied years and experiences during his career, Hay finds highlights in almost every aspect of his work.

“From getting stuck in a snow drift at 4am on a Sunday morning on the road from Dufftown to The Glenlivet, all the way through to arriving in Reefton to find such an exceptional and dedicated team after many months of Covid-19 related delays. The main overarching highlight that I feel the benefit of everyday is how fortunate I am to work in an industry full of energetic and caring people, unique characters and life-long friends.”

However, spearheading the development of the New Zealand Whisky industry is the most exciting aspect of the future for Hay. With some of the best barley in the world being grown here in New Zealand, passionate farmers and maltsters combined with the water supplied by the West Coast rainforest around the distillery are helping the team to create a World Class Single Malt in their Moonlight Creek Whisky. Bass' vision to attract visitors can be realised through the distillery and Hay’s work to highlight not just the wonderful oasis of Reefton, but the quality of produce and craftsmanship on the West Coast, and within New Zealand, to the world. One of the first Whisky casks laid down will be a 100 year cask that the team won’t see the end result of in their lifetime.

“One of the most exciting aspects with Malt Whisky is that this is a legacy endeavour that we will be able to pass on to future generations. We are laying the foundations for future generations to continue to grow and benefit from.”

McDonald’s workers in ten cities across the USA went on strike to demand better protection against sexual harassment. “The walkout is believed to be…