Meredith Earle likes pineapples, limes, gin and rum. As the second in command at Austin Club Christchurch, she has over ten years of bartending experience. In 2016, Earle was the only woman in the NZ Bacardi Legacy Cocktail Competition finals, and while she didn't win, it hooked her into the cocktail world forever.

Earle was brought up as an "army brat" in Wellington. She moved all over the country before settling in Dunedin to study medicine on a scholarship at the University of Otago. There were once big dreams of becoming a Forensic Anthropologist or Cardiovascular Surgeon, but she instead chose a path that led her closer to family in Christchurch. Home is now the Austin Club, with a family vibe Earle has experienced at no other bar; she is thankful for her fearless leader Matt Barnsley.

"I'd always been an outgoing and over-enthusiastic person who loves to help people and solve problems. So, I naturally fell into the bar scene after my mother's many stories of working in a bar like the one in the movie, Once Were Warriors."

What was supposed to be a weekend trip to Queenstown turned into a six-month stint, where Earle lived and breathed everything bar. Then came the Bacardi cocktail competition, and the rest is history.

Earle was drawn to the hospitality industry by its community. The level of camaraderie gained from working in such a fast-paced environment is like no other.

"We often work long hours, drink cold coffee, forget to eat, forget to pee, don't see the sun and tend to share a drink together after a busy shift, so we really do get quite close."

The most rewarding aspect of her job is making someone's day, blowing a customer's mind with a cocktail that takes them on a journey or introducing them to a new bevvy. It is about the little things like sharing a new way to drink gin, a new whisky that suits their palate, a classic cocktail they have never heard of, or a history lesson on Gimlet and why it contains lime cordial, not lime juice and sugar.

Earle also has a passion for sharing knowledge. Seeing the light in a coworker's eyes when they taste a great cocktail, discover a new flavour to use, remember the difference between wines, or learn the trick to carrying ten flutes in hand is magical to her. She believes knowledge builds confidence, and confident staff are the best kind.

A Daiquiri is hands down Earle's favourite cocktail. It is clean, crisp and well balanced. She recommends a limited edition Bacardi Heritage 1909 Daiquiri, made with Bacardi Carta Blanca's original recipe. Her trick to making one is using half ice cubes and half crushed ice. Ultimately, it is about a drink being the whole package: the taste, the look and the story behind it.

"If you've never had a classic Bacardi Daiquiri, you need one in your life now."

While a Daiquiri is her favourite, Earle can never see a Negroni going out of style. It is served with an Austin printed cube and orange slice at the Club. But because there are so many flavour variations, there is a Negroni for everyone. Otherwise, Austin's Cat in the Hat is the go-to drink for new customers. Based on a classic Miami Vice, it is a strawberry and lemongrass-infused Daiquiri with hot Pina Colada foam.

The Austin Club has an extensive range of non-alcoholic offerings that Earle is quite proud of. They stock MON wine, a Melbourne-based company that uses fresh fruits to recreate classic wine flavours. They have low and zero-percent craft beers as well as a zero-percent gin. Almost every cocktail on the menu can be turned into a low and no offering. Earle is all for drinking responsibly and hopes to see New Zealand's drinking culture shift in a more sophisticated direction.

The Cadrona Distillery and Elsewhere Gin are two local spirit companies that excite Earle, but most of all, there is the soon-to-be-released Austin Club Gin. Working with foraging guru Peter Langlands and Mark from Elsewhere Gin, the home brand gin is one to look out for.

When not working as a bartender, Earle loves a good bed day. Getting the housework done and then relaxing in bed with some good bread, cheese and Netflix. She loves to cook or listen to music and spend time with the Austin family every occasional Sunday. The team loves a good karaoke night or pizza and board games. Most recently, celebrating floor superstar Isobel's birthday with bowling and laser tag.

The lovely Meredith Earle leaves us with some words of wisdom for bartenders everywhere;

"Be a sponge; we are all constantly striving to do better and help push the boundaries of what a cocktail can be. Be a Nerd; invest in some great cocktail books or come and check out the Austin Club library. But most importantly, look after yourself and your fellow bartenders. We work in a tough industry and know mental health plays a big part. I am always free for a hug and a kōrero over a cocktail anytime." 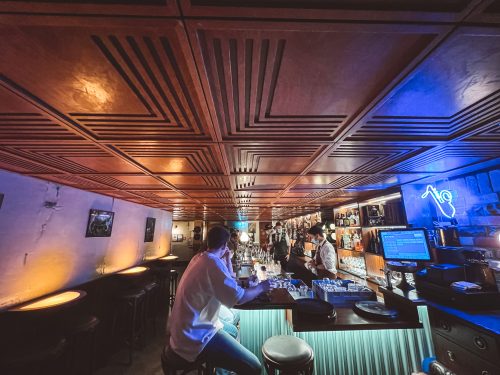 After finding out that their daughter was dairy intolerant and struggling to find suitable dairy free replacements, Darren and Celeste Foreman decided to do…