A lot can change in almost 30 years, which is why McDonald’s New Zealand has decided it’s time the iconic Kiwiburger song has an update. When the song was originally released, there were 1.2 million fewer Kiwis, New Zealand only had one website, and we all loved marching girls and paua shells, apparently.

As our country has changed, so have our people. Our beliefs, our work, our living arrangements, our technology and our tastes. It’s safe to say what we loved almost 30 years ago as a nation, and what was important to us, has probably changed a bit too.

So, as the company which employs 10,000 Kiwis and serves 1.6 million of them every week, McDonald's thought it was time to check that the unofficial Kiwi culture anthem, the Kiwiburger song, still contained the 46 things Kiwis love most, and they’re getting widely loved Kiwis Anika Moa and Troy Kingi to record a new modern anthem.

While the original lyrics paid homage to Kiwiana throwbacks such as thermal daks, moggy cats, cheerios and more, McDonald’s wants to make sure the song is still relevant to the Kiwis of today.

“It’s a fine balance between what is still relevant to Kiwis today, and how far we have come as a nation in the past three decades.” 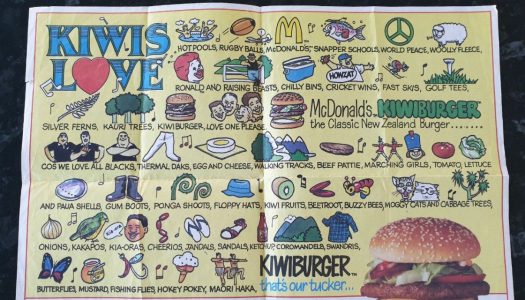 An original McDonald's Kiwiburger tray cover from the early 90s

The 2018 vintage at Jacob’s Creek got the VIP treatment, as acclaimed actor Chris Hemsworth joined the team to get an insider’s view on…