The U.S. moved from a drip coffee culture to espresso-based in the late 1980s and early 1990s, a shift that was commercialised by Starbucks and others. Before, it was only found in niche areas and pockets of society linked to migrants from Western Europe.

As a British colony, Australia was heavily into tea culture, but during World War II there was a mass migration from Western European markets like Italy, Greece, and Malta. In turn, the country switched from tea to espresso in the 1940s, and in the following years, that’s grown into a vibrant and personalised premium coffee market.

The market is so premium that major brands like Starbucks and Dunkin’ have failed to successfully expand in Australia. It’s the arena of independents, according to Stone.

“When you talk about two different coffee cultures, you have the U.S., which is the land of chains dominated by Starbucks and Dunkin’, versus Australia where you have no chains that dominate,” he noted.

“It's all about the independent operator. And what does that mean? It means that the standards of service, the standard of product experience, is so high because you have the owner/operator, the proprietor in there, spending so much time focusing on the engagement with their locals—not customers—and making them feel so special.” 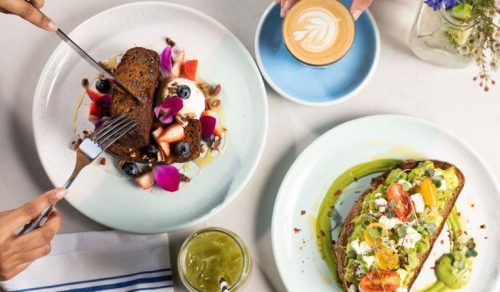 When Stone first arrived in New York by way of Melbourne in 2010, he missed the small independent coffee operator that knew his order when he walked in. He explained that U.S. coffee chains are led by the products they sell and are built for convenience and scale, while Australian coffeehouses are inspired by service and community.

That’s where Bluestone’s “boutique in scale” mindset came into play.

The company expects to finish 2021 with about 60 locations and anticipates a minimum of 20 openings in 2022. But there’s potential to far exceed that based on the growing pipeline. At that level, Stone says, Bluestone will be the largest boutique retail, coffee, and café concept in the U.S. and the biggest Australian hospitality export.

Stone acknowledged it’s a risky strategy to spread a brand so early into existence, especially without abundant capital. But the CEO is confident in Bluestone’s products, tech stack, and management team. So far, the strategy has paid dividends.

“We got the diversification that we needed with so many of our Northeast markets so badly hit from COVID,” Stone said.

“We have some diversification in Los Angeles that wasn't as impacted as severely because the business district is not as large there and we're not in it. We're in more residential urban areas. Coffee is a wonderful anchor product because it's stood the test of time.”