Taranaki’s outstanding hospitality venues were acknowledged at the Taranaki Hospitality Awards. Affectionately dubbed ‘The Halamoanas’, the awards were presented by the Restaurant Association of New Zealand, along with lead partners, Lexis Comply Hub.

The Social Kitchen had a strong performance, taking out three awards for outstanding restaurant, ambience and design, and Seamus Fawkner taking out the emerging chef title.

The outstanding chef award was taken out by Robert Isbister of Meat & Liquor Steakhouse, while Ngapera Hohaia-Aiton, of Arborio, won the award for outstanding waiter/waitress.

The growing list of places to grab a drink was highlighted with some of the top spots being rewarded for their hard work. Shining Peak Brewing was announced as the region’s outstanding bar, while Snug Lounge won the outstanding boutique bar award. Kerry Simeon of Crowded House won the award for outstanding bartender.

Deluxe Diner was recognised by the people of Taranaki, taking out the People’s Choice Award category.

“Named by the Lonely Planet as one of the best regions to visit, we’ve seen a real resurgence of the hospitality scene in Taranaki,” said Marisa Bidois, CEO of the Restaurant Association. “With a swathe of openings in the past year, there is a new creative energy amongst the hospitality crowd, which is reinvigorating the dining scene.”

“As an industry, it’s so important that we take time out to celebrate our success and acknowledge our achievements.”

A full list of winners can be found below. 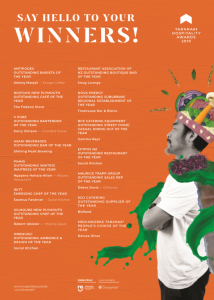 After failing to pay neither a minimum wage nor holiday pay to an employee; as well as failing to keep accurate employment records; Just…