Since its inception, Afterpay has taken the retail world by storm. It currently has around 4.6 million users despite being founded only four years ago. Afterpay gives users options when it comes to payment, and offers retailers a new way to advertise to specific groups of customers. Although Afterpay is most commonly used for fashion and beauty, there is a range of food retailers that are also jumping on board.

With Afterpay’s success across other retail markets, Restaurant and Café wonder whether it’s just a matter of time before it reaches foodservice—eat now, pay later.

The idea of paying in increments, or implementing an IOU scheme does sound tricky in terms of foodservice. What happens if the customers want to split the payments? What happens if the customer is unhappy and want a refund? This is not to mention the extra hassle involved in organising how the payment is to be collected, and who is to chase it up and make sure it goes through. With Afterpay, it would be possible to provide safety of payment for the restaurant as a reliable payment method is needed through the app, but this leads to another problem: cash flow. Small businesses around the country already often have trouble with cash flow. Restaurants and cafés can often struggle the most with this, as the overheads and margins are extremely tight. Furthermore, delivery apps have been a hot topic recently due to the fees that they are charging for their almost-necessary services (necessary for the modern consumer, that is). If restaurants now have to pay Afterpay a fee, the margins become tighter, and there is a good chance that the cost of restaurant food would have to increase to absorb these fees. Either that, or many of the smaller venues around the country would go under, or be absorbed by larger chains that can afford to absorb.

If delivery apps are anything to take note of, however, once restaurateurs realised the importance of having the ability to cater to the growing demand of people wanting food brought to them, they had to get involved. Restaurants and cafés that didn’t jump on board with delivery apps often found a decline in customer base—if not a decline; they didn’t grow as fast as those involved in delivery. If Afterpay were to take off in the foodservice industry in a similar way that delivery apps did, it is likely that we would see a quick, and ruthless adaption of its services—get on board, or fall behind. Last year, Australian Afterpay recorded 2.3 million active users; imagine how many customers that could be for the foodservice industry. Instead of people having to save up money for a nice night out, something that perhaps isn’t as common among younger consumers nowadays, Afterpay would allow them the freedom to dine how they like and pay when they can. 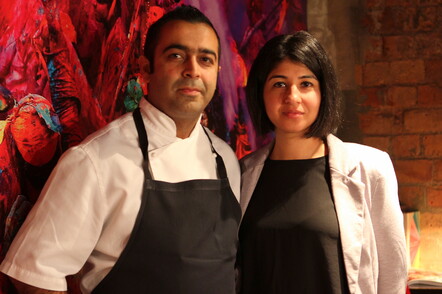 “It would be interesting to see if it works in the food and beverage sector—we have only heard of retailers using it,” said Sid and Chand Sahrawat, owners and operators of Sidart, Cassia and Sid and the French Café. “We wouldn’t dive into using it but would consider it if customers requested it. Merchant fees and commission are obviously things we would need to examine and see if our business can absorb them.”

When we contacted Afterpay, they did not make it clear as to whether or not they are intending on branching into the foodservice industry.

The question remains, though, if enough people demanded it, would it become a necessity?