With its innovative Chipotlanes and digital growth leading the way, the Mexican inspired, American fast-casual restaurant, Chipotle, is ready to accelerate development in an environment that, at first glance, wouldn’t appear to be poised for growth.

Chipotle’s digital business more than tripled this past quarter as COVID-19 continues to rattle what we expect of consumer behaviour. A 125 percent year-over-year lift in delivery. Order ahead up 140 percent. Entrees per digital transaction significantly higher. Fifteen million rewards members in 15 months—perhaps the fastest growing program in quick service history.

While these striking figures are a sign of strange times, they have opened the door for tangible long-term potential for Chipotle. Starting with development itself.

The brand opened 37 net new restaurants in Q2, a three-month period that ended June 30. Of those, 21 included a “Chipotlane,” and the company recently debuted its 100th such venue as it climbed to 2,669 total restaurants.

“Our strong financial position along with less competition for high-quality sites as other businesses pullback is allowing us to build a robust new development pipeline,” noted CFO Jack Hartung.

Chipotle expects to accelerate its new unit development in 2021, the company said during its Q2 recap. It's even planning to hire 10,000 new people over the next few months to get there and unveiled a "We Are Open. We are Growing. We Are Hiring" campaign in May, which resulted in roughly 8,000 hires to-date.

Hartung said stores with Chipotlanes have pushed digital mix of 60 percent in recent weeks, with about two-thirds coming from order ahead and pickup. That latter point is a critical driver. The higher-margin and more consumer-friendly channel is one Chipotle wants to chase.

There are 13 Chipotlanes in the chain’s comp base, meaning they opened well before the pandemic. At those, sales run more than 10 percent higher from the same opening period, while more recent openings during COVID-19 are 30 percent above average.

It’s led Chipotle to forecast 60 percent of its new restaurant growth this year will feature mobile pickup lanes. Next year, it will exceed 70 percent. 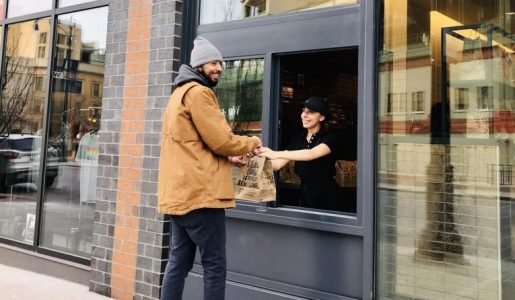 Chipotle’s growth is opening up, as Hartung noted, because the fast casual’s accessibility has. There are a lot of different dining occasions now, and many of them were set alight by COVID-19 lockdowns.

The brand’s digital business grew 216.3 percent in Q2, year-over-year, to nearly 61 percent of total sales, Chipotle said Wednesday. It accounted for $829.3 million in the quarter—the company’s highest quarterly level ever by some distance.

Naturally, these are not average times and the results reflect that. Chipotle’s in-store ordering is down about 37 percent, and the brand said it’s reclaimed only about 40–50 percent of dine-in business.

This proves that digital is the new reality and shows the importance for businesses to take advantage of consumer’s newly found comfort with e-commerce and online ordering. The new designs for Chipotle make even more sense now in a digital-centric world. Perhaps restaurant chains here in New Zealand should keep an eye on the innovations of their US counterparts.

The regional awards season continues – just days after the announcement of the Queenstown winners, the Rotorua finalists have been revealed. Presented by the…