Two young hospitality workers - one of them an EIT graduate - have converted their long-term passions into promising careers in the industry they love.

Tayla Ellmers and Kate Jones chose different pathways to pursue their hospitality dreams, with Tayla studying at EIT. Kate decided not to take up a university scholarship to study law and plunged herself into working front of house in local restaurants instead. The two are now colleagues at Mary’s Wine Bar, a Havelock North restaurant collaboration between Chef Casey McDonald and Craggy Range Winery.

EIT graduate Tayla’s love for the industry began when she attended EIT’s Hospitality Trades Academy in her last year at Central Hawke’s Bay College. A self-confessed “little old farm girl”, the 21-year-old did not want to go to university, so followed her mother’s suggestion and enrolled in the Level 4 Cookery Programme at EIT in 2017. 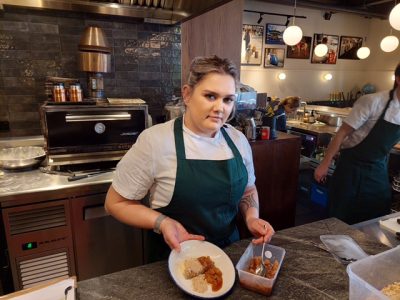 Awarded a scholarship, she loved studying and decided to go back to EIT in 2018 to complete the NZ Diploma in Cookery (Patisserie). The appeal of Patisserie (desserts and breads) was that it “needs more patience and is more accurate and technical as well.”

“The thing about EIT is that you get a lot of support from everyone, and your tutors are just so great.”

Tayla was awarded another scholarship and also found herself, almost by accident, becoming a model, with her face used for menus, workbooks and front covers. Knowing what she wanted to do and having an education behind her, Tayla was soon hired by Chef Casey McDonald from Craggy Range Winery.

Tayla noted that her training at EIT prepared her for working at Craggy Range, where she stayed for two years before moving over to Mary’s.

“I loved working at Craggy Range and after lockdown last year, my workmate Tom and I were given the opportunity to run Casey’s Diner in the Cellar Door, which operated two days a week.”

From there she moved to Mary’s where she is a junior sous chef, working in the kitchen, but also preparing cold appetisers and desserts.

“I have a really great kitchen team and front of house team at Mary’s. We’re all like a big family and all support each other. It is the same at Craggy Range.”

Glenn Fulcher, EIT’s Head of School - Tourism and Hospitality, said his School’s graduates are trained to be work-ready and he supports the need to recruit more people into the industry.

“It is important for high school students to have vocational pathways into hospitality, so that they don’t feel they need to go away to university, but that there are options here at home,” he commented. 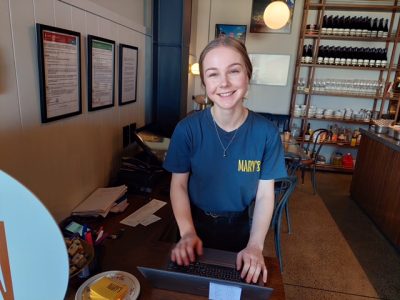 An example of this is Kate Jones, who says she was not aware of the hospitality options available through EIT when she was at school. Being in an accelerant class, she was encouraged to go to university. She had entered the industry as a thirteen-year-old, doing part-time catering work after school and at weekends.

While she worked at a number of cafes, pubs and restaurants in Hastings, Kate never saw it as a career path, rather using the opportunity to make money to pay for university. She finished Year 13 at school in 2017 with a big decision to make.

“When the time for university came around and things happened in my personal life, I decided to do a gap year and just keep working. And then I decided to stay in Hawke’s Bay and keep doing hospitality.”

Kate was hired by a local Havelock North restaurant, Deliciosa, where she eventually rose to the position of junior manager before trying her hand at fine dining at Craggy Range. It was the right move, but not the best time because she started in Level Two of COVID-19 lockdown.

“This was social distancing; single server and it was difficult starting a new job with a totally different style of service where you can only be the single waiter and you have to know everything about the wine. And I absolutely loved it.”

An opportunity presented itself to move over the Mary’s when it opened at the end of last year and Kate has not looked back, becoming assistant manager at the young age of 21. 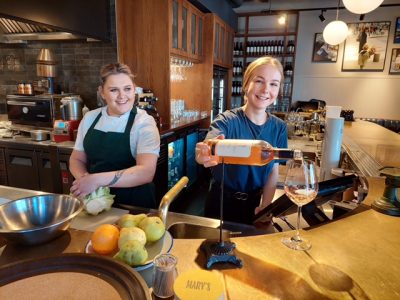 “You have to think so quickly on your feet while managing a team that you are training at the same time. We’ve got a lot of high school students, which is amazing as they remind me so much of myself when I was younger.”

As for studying further, Kate says doing a Programme through EIT’s School of Tourism and Hospitality is always a possibility.

“Working in Hospitality has taught me so much more than just waiting tables. There’s opportunities for accounting, marketing, and management, all of which are skills useful in everyday life. You can always learn more.”

Casey expressed that Mary’s is pleased to have young talents like Tayla and Kate.

“One of the core reasons for Mary’s opening was to give opportunities to young hospitality workers and Tayla and Kate are a really great example of hard work and professionalism paying off.”

Daniel Lee, head chef at Norris & Bell in Tauranga wanted to utilise the restaurant’s kitchen during the daytime, outside service hours while doing…