The enormous popularity of Taco Bell is expected to drive strong tenant interest in two brand-new retail centres where the Mexican-inspired restaurant will open its doors this summer.

Taco Bell has been a retail sensation since launching its first New Zealand store in November last year, attracting huge crowds and lively trade. The two newly announced stores will be located at the Taupiri Service Centre, off the Waikato Expressway near Hamilton, and Stoneridge on Lunn, in the fast-growing East Auckland suburb of Stonefields.

Both new locations, which were leased by Colliers International, will double Taco Bell’s presence in New Zealand.

It is the latest volley in an aggressive expansion strategy by local operator Restaurant Brands, which is planning 60 new Taco Bell stores across Australia and New Zealand in the next five years.

“This will be the first Taco Bell in New Zealand to offer drive-through service, making the most of its strategic location. The Taupiri Service Centre is positioned just south of the Waikato Expressway’s new Huntly section, which was completed earlier this year,” commented Alan Pracy of Colliers Hamilton, who secured the Taupiri Service Centre lease.

Dedicated on and off-ramps, both north and south onto State Highway 1, put the retail centre within 15 minutes of Hamilton and an hour of Auckland. The centre is anchored by a BP service station and a McDonald’s restaurant, both of which opened earlier this year. The addition of Taco Bell further reinforces the strength of this premium retail location. 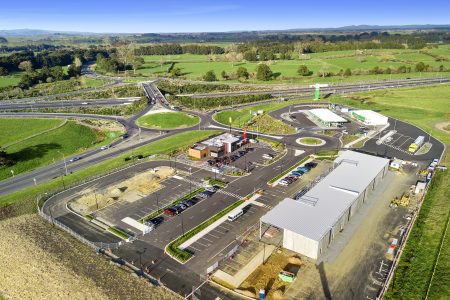 Colliers International is marketing the Taupiri Service Centre’s remaining retail tenancies for lease. Units of between 80sq m to 350sq m are available, with completion of the new retail block expected in December.

“This is an ideal opportunity for convenience retailers such as a cafe, bakery, sushi shop, or local produce grocer,” noted Justin Oliver of Colliers Hamilton, adding that the Waikato Expressway, which is due for completion this year, will be a game-changer for the ‘Golden Triangle’ centres of Auckland, Hamilton and Tauranga.

“The completed expressway will be the region’s key transport corridor, shaving travel times between Auckland and the agricultural and business centres of Waikato and Bay of Plenty. It will also allow traffic to bypass Hamilton’s CBD and suburbs, making the Taupiri Service Centre a strategic convenience stop for traffic diverted from the urban centre.”

Stoneridge on Lunn is a brand-new retail development on the high-profile corner of Lunn Avenue and Ngahue Drive in Stonefields, East Auckland. Completed earlier this year, it services a growing and affluent catchment that includes Ellerslie, Meadowbank, Remuera, Mt Wellington, Panmure and Glen Innes. 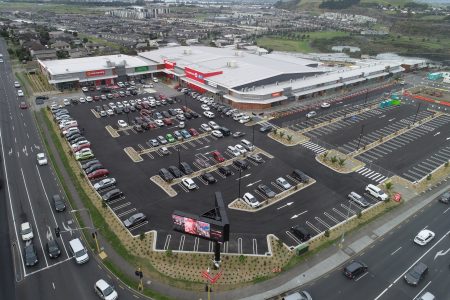 The centre is anchored by The Warehouse, Warehouse Stationery, Noel Leeming and Bed Bath and Beyond. These large format retailers are complemented by a range of shops, services and eateries.

“Taco Bell may be a new entrant to New Zealand’s retail scene, but it is already a full-blown phenomenon. Its restaurants at Brickworks in New Lynn and Shortland Street in Auckland’s CBD have been immensely popular, drawing diners from far and wide,” said Leroy Wolland, National Director of Retail at Colliers International.

“Taco Bell’s decision to open a third Auckland store at Stoneridge on Lunn highlights both the quality of the development and the desirability of the location. Proving to be a brand beyond the typical quick-service restaurant, customers of Taco Bell Stoneridge on Lunn can expect to see free wi-fi, customisable music, refillable soft drinks and a range of beer and delicious frozen margaritas for adult guests.

“Local fans will also have delivery offered to neighbouring suburbs for those that want the convenience of hot tacos and burritos delivered directly to their door.”

Stoneridge on Lunn is the first North Island property to be developed by Gibbons – a Nelson-based family-run property company which has delivered numerous large-format retail centres in the South Island.

“We are absolutely delighted to welcome Taco Bell to Stoneridge on Lunn. The latest addition to our family of tenants nicely complements the mix of other existing tenancies,” expressed CEO Scott Gibbons.

“Stoneridge on Lunn is a vibrant metropolitan destination that offers something for everyone, seven days a week. It fronts an extensive on-site car park with 386 spaces, providing tenants with excellent exposure to Lunn Ave, Ngahue Drive or both,” said Retail Broker Nick Pettitt.

“Excellent access is offered via a traffic light-controlled intersection from Lunn Ave. The centre also benefits from pedestrian access directly from the Stonefields walkway. The superb combination of convenience, high exposure and a growing customer base makes Stoneridge a winning destination for retailers.”