Samantha was awarded a silver medal for her skills in the kitchen and will now go on to represent the North Island at the grand finals of the 2021 Nestlé Golden Chef’s Hat Award which will be held in Sydney during September.

Samantha created a two-course menu comprising a main of seared ginger stuffed sous vide chicken breast, a braised chicken lollipop on sweet potato puree and vegetables. Dessert was a chilli infused chocolate mousse on a crispy orange shortbread served with spiced rhubarb. The judging panel scored her and the other competitors against globally recognised culinary standards. 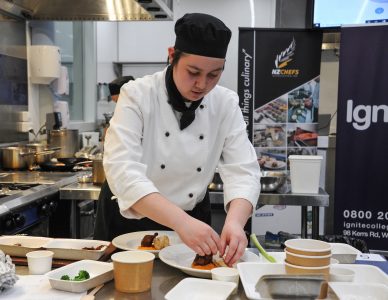 Warena joins South Island representative Jamie Jackson as they get ready to battle against each other and top young chefs from Australia at a live cook-off which will be held at Fine Food Australia. One winner will take out Golden Chef of the Year and a $10,000 cash prize.

Executive Chef and Nestlé Professional head judge Mark Clayton says, “It’s never been more important to come together to support our industry, inspire young talent and provide key skills for them to succeed in their careers. This Award is about pushing yourself to be a better chef. It’s a chance for young chefs to step outside their comfort zone and challenge themselves. Jamie really showcased his cooking passion on the plates and delivered standout dishes.”