When explaining the decision to wait until December 15th to open Auckland’s border, Jacinda Ardern basically admitted that the lower vaccination rate throughout the rest of the country was holding the city at ransom.

Auckland has carried most of the weight of the COVID pandemic for the last 18 months and has endured the country’s longest lockdown restrictions. While the region’s businesses have struggled, the rest of the country has been able to take advantage of support payments made available as long as the city remains at a high Alert Level.

Other regions around the country are itching to have the most populous city let its people out, but while discussions have been had around ‘why wait?’, little has been said about what will happen to Auckland businesses when all the JAFAs leave for their summer vacation.

Of course, regional business associations are excited at the prospect of Auckland tourists helping their summer economy, but it appears that at a time that has always been notoriously quiet for the City of Sails, the country’s biggest city has been left to bear the brunt once again. 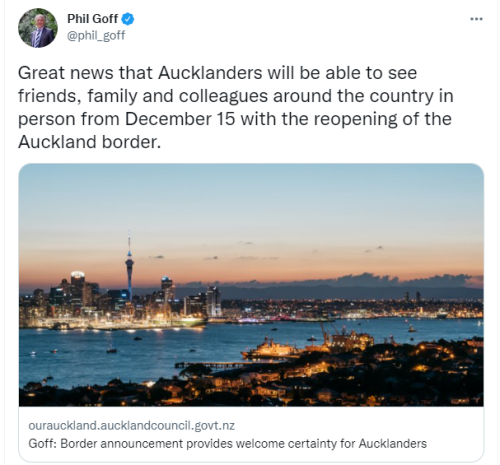 Has Auckland's Mayor considered the impact on Auckland businesses this summer?

"People will be travelling into Auckland but as we know traditionally Auckland empties out over the Christmas period so for Auckland itself it's not going to be anything like a tourism boom," he said.

"It's going to be far more important for the rest of the country that the huge Auckland market is available and they're getting out to their favourite holiday spots."

The government hasn’t exactly been the best at understanding what business sectors really need and the words ‘targeted support’ seem to be outside their vocabulary.

Auckland summers traditionally feel like pandemic times anyway, so will Christmas 2021 feel any different for local businesses? Yes, because not only will they be facing quiet city streets, they will also be facing a future with possibly no government support.

Where’s Auckland’s voice-piece, standing up for the region’s businesses? Even Phill Goff, the city’s Mayor hasn’t addressed the economic elephant in the room, instead echoing the sentiment of many short-sighted politicians, which is simply ‘Yay Freedom’.

Aotearoa’s largest city, and in fact the rest of the country, need to brace for the ongoing effects Auckland’s great exodus will truly have.

Greg Piner has an impressive career history as a chef and has worked for many leading restaurants around New Zealand including Blanket Bay, Hotel…