Highly anticipated Saxon + Parole will be open next week in Auckland’s Commercial Bay. The restaurant and bar will be the fourth to be opened by AvroKO Hospitality Group in 2020 and is an outpost of an iconic downtown New York restaurant known for its award-winning cocktails, great food, and modern interior design.

The restaurant makes its debut on the second floor of Commercial Bay, in one of the tower’s premium spaces boasting breath-taking views of the Waitematā Harbour. 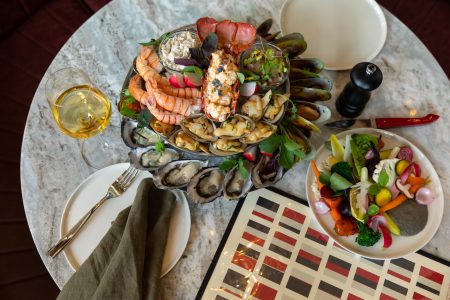 “When working for Peter Gordon as a young chef, I fell in love with New Zealand — the country, the people and especially the food,” said Farmerie.

“Working with ingredients I had never come across before in my career was such a privilege and getting to know the people who work tirelessly to bring these beautiful ingredients to life and to our tables was an unforgettable experience.

“Saxon + Parole’s Auckland outpost is nostalgic for me in that I have the opportunity to work with these same people and their ingredients again, highlighting them in a different way and merging my life and career in New York with my love and respect for New Zealand.” 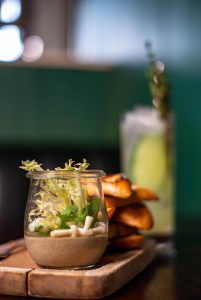 Locally-sourced meats and seafood are the stars of Farmerie’s menu, which includes an extensive raw bar selection, seafood towers, the award-winning Saxon Burger (made with 28-day dry-aged beef) and grass- and grain-fed steaks served with bone-marrow bearnaise. For dessert, a seasonal American pie bar will be on display, with slices served with custom ice cream flavours.

The drinks offering is inspired by the New York eatery’s cocktail programme, which helped the NoHo space to be named ‘Best American Restaurant Bar’ and ‘Best Restaurant Bar in the World’ from Tales of the Cocktail and included in Esquire magazine’s ‘Best Bars in America’. 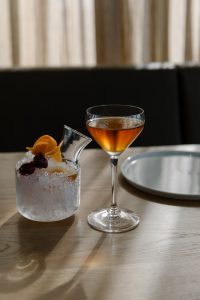 There’s a DIY Bloody Mary Bar on the weekends for brunch, a DIY martini trolley in The Martini Room, and a monthly cocktail membership program called the Cocktail Cabinet of Curiosities. House-made syrups, bitters, sodas and juices complement the curated selection of artisanal spirits, including Parole whiskey, which is specially made for Saxon + Parole.

“Almost 20 years ago, we opened our first restaurant, PUBLIC, in New York City which focused on and celebrated Antipodean cuisine inspired by Brad’s travels through New Zealand and working with Peter Gordon,” explained Marion Emmanuelle, Managing Partner at AvroKO Hospitality Group, which has partnered with Auckland’s Public Assembly on the project.

“Since then, it has been a long-time goal to open restaurants in the region that inspired it all. Watching the doors open to our flagship restaurant is nothing short of a dream realised.”

The dining room and bar have an upscale, modern aesthetic with Bauhausian graphic elements and rustic flourishes. The mezzanine space, situated directly above the main bar, seats 48 and is perfect for events, while the private Lorillard Room offers an intimate atmosphere with velvet upholstery, martini service, a record player for guests to use, and an eye-catching six-metre-high artwork. 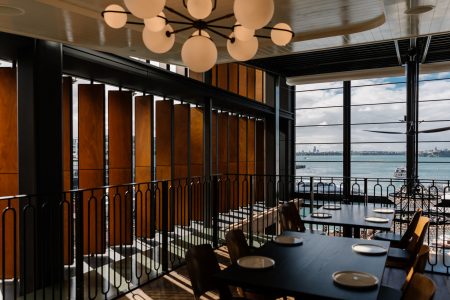 Bidfood’s Trade Shows provide a place for those in the industry to be inspired, educated, and a place to network with customers and suppliers…