A Milan plant-based burger concept called Flower Burger has landed in Los Angeles. The unit is helmed by Elena Platt and Barbara Lazaroff, famed restaurant designer and co-founder of many of Wolfgang Puck's early restaurants. The concept’s defining feature is something customers won't easily forget: the buns range in colour from bright pink to purple to lime green. 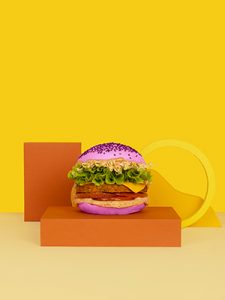 Elena and David Platt first discovered the concept after eating “too much pasta” on a trip to Italy. Looking for a healthy alternative, they stumbled upon Flower Burger, a plant-based concept from Matteo Toto founded in 2015. It seemingly brought fun to plant-based, better-for-you food.

The Platts, in partnership with Los Angeles entrepreneur and friend Lazaroff, decided to open the first North American outpost of Flower Burger as a delivery-only ghost kitchen with plans for a brick-and-mortar later this summer.

As part of the better-for-you ethos of Flower Burger, the buns, despite their unnatural colours, are made of natural ingredients, not boxed dye. The chefs use foods that are naturally high in colour pigmentation (beets, spirulina, turmeric, and purple carrot extract to achieve the pink, green, yellow and violet buns respectively). The flour is imported from Italy.

Alongside the patties and social media-worthy buns, Flower Burger crafts plant-based proprietary sauces and cheeses that are all vegan. However, the Platts don’t like using the word vegan, instead, the menu at Flower Burger is ‘plant-based' to avoid the politicisation of words like vegan and vegetarian.

Sugar Rebels is Nick Makrides’ idea of how baking should be—cakes, cupcakes and macarons. This book contains Makrides’ most delicious and sometimes outrageous recipes,…