Join the #refillution and help reduce plastic pollution across Aotearoa by being a part of RefillNZ’s café promotion in August.

Plastics is a big issue for Kiwis, according to the Colmar Brunton 2021 Better Futures report, plastic reduction is Kiwis’ top environmental concern for the third year running.

RefillNZ is a campaign to reduce plastic pollution from single-use plastic by making it easier for people to refill with free wai on tap. There are now over 1400 cafés and other businesses that are part of the RefillNZ team, all are on the RefillNZ App (IOS and Google) and the web map, in fact, ‘wheretorefill’ is the most popular page on the site. refillnz.org.nz/where-to-refill

To support Kiwi hospo businesses during August - RefillNZ will be running a digital promotion to encourage people to support local cafés who are part of RefillNZ – with prizes to be won. 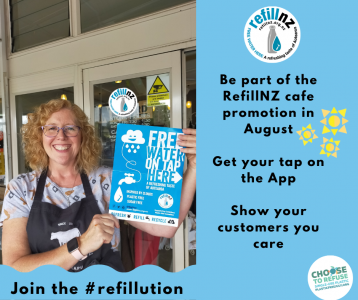 Join now to be part of the promotion, it’s super easy, simply:

By being part of the #refillution, RefillNZ helps you show that you’re doing your bit and that you care - which also helps foot traffic into your business. Plus, the business gets pinned on the online map and the RefillNZ App, as well as some extra promo on social media.

The land and buildings housing a café opposite one of New Zealand’s most instantly-recognisable roadside attractions have been placed on the market for sale….