The word fusion means a lot of different things to a lot of different people. To some, it’s an antiquated buzzword; others believe it underlines the connectivity shared throughout the world’s culinary scene. The idea of fusion has been around for an age. The base concept of blending two different types of cuisine, or preparing a dish utilising the techniques of another culinary culture has been happening since humans have been able to traverse the world. For example, Italian pasta is likely a relative of the Asian noodle; while garum, a fermented fish sauce originating from Ancient Roman, Greek, Byzantine and Carthaginian culture, is thought share culinary origins with many modern-day condiments like ketchup, and Worcestershire sauce.

The term fusion, now, however, seems to be thrown around liberally, and instead generally represents an entire aspect of New Zealand’s culinary scene. New Zealand’s diversity means that the idea of blending ethnically different foods is often synonymous with dining out. Yet the late Jonathan Gold, Pulitzer Prize-winning food writer for the Los Angeles Times, described how terminology could warp food, and lead to unjust clarification. In a Good Food podcast in 2014, he said, “I hate the word ethnic. Everything is ethnic. No one talks about French food as being ethnic. Ethnic nowadays is just used to describe the ‘other’.” Although Gold said this in reference to Los Angeles, the same ideas can be transferred to New Zealand. With a saturation of varying cultures and cooking styles, we’re essentially all the ‘other’, and not the ‘other’, at the same time. “To indicate that something is ethnic, or the ‘other’, is to minimise its importance and minimise its beauty. It’s to put it in a different category.” But as Gold would go on to explain, the idea of fusion can still be relevant, just in a newly imagined frame. “I think of fusion of being something very specific. A moment in the 80s where classically trained chefs were introducing new flavours into their traditional cuisine. Nowadays, there is a trend where young chefs, who have been trained classically, are going back to reinterpret the food that they grew up eating.” And perhaps therein lies modern ideas of fusion. It isn’t the same as it had been, as globalisation means that people are increasingly connected, and one never has to look too hard to find a taste of the international when dining out.

But what about the crass juxtaposition of two entirely different dishes? A cheeseburger bao bun, or a pastrami and Swiss cheese dumpling—is that fusion? Or is fusion simple the subtlety that lies somewhere in the mix-up of technical interactions and ingredient mash-ups? In conversation with Min Baek, head chef and owner of Han restaurant in Parnell, he described his take on modern fusion. “For me, the term fusion is used to describe the mixing of ingredients and cooking techniques from different territories, to create something new. Fusion might be the best way to be creative in the kitchen.” This sentiment is perhaps something to keep in mind. Culinary boundaries are continually being pushed. The modern dining scene, therefore, calls equally for the constant replication of clean plate and elegant fine-dining dishes, and the experimental fusion-based cuisine. And what better day and age to do this in than now? As mentioned earlier, the world is increasingly connected, and people are increasingly ready to venture away from their meat and two-veg and try something new. As Baek described, though, lots of these combinations require trial and error. “Some people know how to take advantage of great combinations that are not normally put together, to create something unique and delicious. Not all the combinations work, of course, but there is currently a big field to explore as the options are basically endless.” 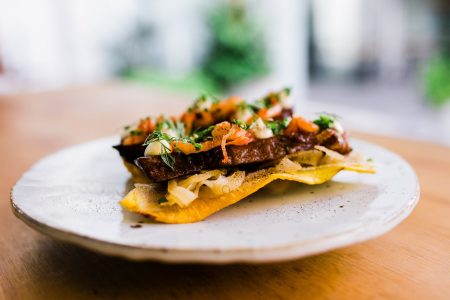 The idea of fusion has penetrated culinary society—at the very least, here, in New Zealand. As Baek said, “It’s reached the most casual of places—even supermarkets are selling butter chicken pies.” And this is true, but is it still considered fusion, or is it just normality? Is there anything out there that is still pushing the limits of fusion and what it means, or is culinary blending just commonplace? Baek believes that there is still a part of the culinary world that calls for fusion. “I think fusion cuisine will continue to evolve and improve in the future, as there will be more knowledge and experimenting done and therefore a better understanding of what ingredients go well together.”

New Zealand’s very own Peter Gordon is often accredited with being influential in the area of fusion. His idea of creating a fused dish sits somewhere in the middle of experimental culinary creativity and crisp-cut traditional preparation. He advises researching, making the original base dish, and then tweaking. Additionally, setting parameters, and being practical with incoming and outgoing components of the dish help to direct creativity through a systematic approach.

While the same weight doesn’t remain in the word fusion, it is still undoubtedly an ongoing trend in the culinary world. It is a spectrum, though, as the mash-up of two different meals for shock value, i.e. cheeseburger bao bun, or sushi pizza, is in a way fusion, but so too is the aforementioned combination of traditionally trained chefs improvising based off differing experiences. With the amount of connectivity that people have to ‘other’ foods nowadays, modern fusion is basically expected. While there are people still redefining the genre, the culinary world’s progressiveness lends itself towards incorporating global flavours across the board regardless. 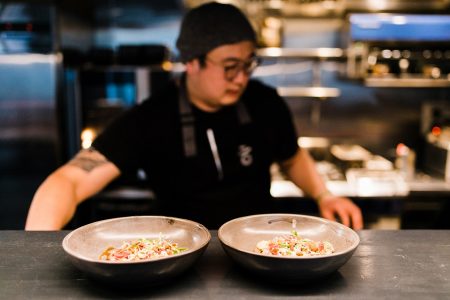 If making smoothies is a hassle in your venue, Anchor Food Professionals have developed a convenient and great tasting, cost effective smoothie solution that…