It’s been a challenging year for the hospitality industry, but restaurants throughout the country haven’t let their own struggles dampen their charitable spirits, as more than 20 of the country’s top restaurants participate in DineAid to raise money for City Missions nationwide in the lead up to Christmas.

Throughout December, participating restaurants are giving customers the opportunity to donate by either adding a voluntary donation to their bill or via creating a DineAid special on the menu, with $2 from every dish going to the cause. This year’s principle sponsor Wall Real Estate’s generosity guarantees that one hundred percent of the money raised goes towards food banks in Auckland, Wellington, Christchurch and the South Island regions.

This year, DineAid welcomes newcomers such as Burger Burger, Lilian, and Williams Eatery, who will be donating $2 from their delicious sojouk sausage dish (pictured), served with fried egg, pickle salsa and kasundi. 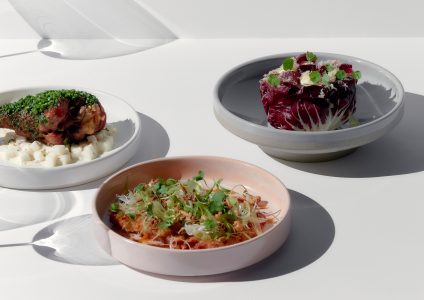 “To be able to give back to those in need by doing something we love is pretty cool. DineAid provides that platform and we feel really lucky and proud to be part of it,” said co-owner Charles Williams.

“After such an incredibly tough year for the hospitality industry, I hope that DineAid encourages diners to enjoy a meal at the participating restaurants and helps bring people through the doors. That would be a lovely win-win in such a difficult time for many,” commented Chris Farrelly, Auckland City Missioner, adding that he is incredibly grateful for the support of those in hospitality, particularly the restaurants who support the Mission’s work through DineAid.

He said it illustrates the full circle of care in our community, and while DineAid is always essential, it feels more important than ever this year, “In a year where so many people have been negatively impacted by COVID-19, the Mission has seen the demand for food parcels double and we can only meet that need with the support of kind and generous people in our community.”

“I hope each diner sees a small addition to their bill at the end of a superb meal as an act of kindness that will help the Mission make a world of difference to those in our city who most need support.”

Nourish Group, who are Long-time supporters of DineAid, always make a big impact with venues such as Euro, Jervois Steak House, Andiamo, Shed 5 and The Crab Shack all taking part.

“It has been a tough year for the industry but that doesn’t mean we shouldn’t have a sense of giving. We are all living someone else’s dream and we are still pretty fortunate. Charity in this form is still possible from us, and still really valuable,” expressed Operations manager, Kieran Turnbull.

DINEAID Cafe was launched in 2012 with coin collection boxes in cafes throughout New Zealand. DineAid coin boxes were placed at the cash desk for bill payers to drop in a few coins when paying their bill.

For a full list of this year’s participating venues please visit dineaid.org.nz