Dave Letele, founder of BBM – which started as a health and fitness programme and has now also evolved into a full-scale food bank – expressed that Sherpa’s generous involvement is making a massive difference.

“It’s literally saving us thousands of dollars a week. It’s not just a case that we don’t have to pay for those cars and petrol anymore, but by having Sherpa take most our deliveries off our hands means my other team members – some who I’ve been paying just to come on board to do deliveries – are now able to get back to their core roles of motivating and helping people in our community be heathier and fitter.”

Because the Sherpa operating model specialises in two-hour deliveries and utilises the ubiquitous crowd-sourced driver pool, it also means hungry families are being fed sooner. 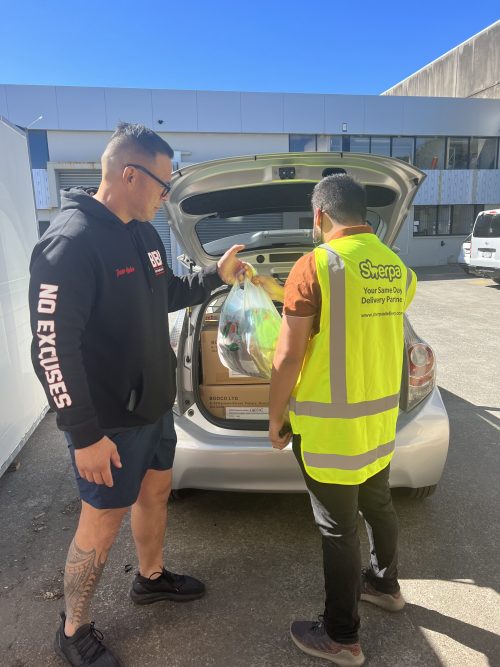 “Before Sherpa came on board a lot of our deliveries weren’t being done until the end of the day simply because we were so busy with not enough people to help out. But now it literally means families are getting their food at midday instead of the very end of the day, and that can make a huge difference to a family when there’s often no food in the house,” continued Letele.

Sherpa is doing hundreds of deliveries a week - all within two hours - around South Auckland for the Wiri based food bank that was set up initially to help community members isolating with Covid but is continuing now as much for people who simply cannot afford to buy the food they need.

Sherpa, an Australian technology company, launched six months ago in New Zealand retail’s very competitive last mile delivery sector and Head of Strategy & Growth NZ, Piyush Bansal, said helping out with the incredible work that Dave and his BBM food bank are doing was the right thing to do.

“We offered our service to Dave and his team because we saw the need and knew we had a model that could make a difference for them. As a new business it’s also important to see how you can contribute to the community around you,” noted Bansal.

“We’re not a logistics or courier company, we’re a tech company offering retailers – and consumers - a better delivery service than anyone else. However, these BBM food bank deliveries are among the most important ones we’ll ever do.”

Although same-day delivery services are nothing new in the local landscape, Sherpa’s point of difference for retailers is the customer service proposition – achieved through Sherpa’s live-tracking technology and capacity.

Ever since first meeting at a wine tasting dinner in the Swiss Alps, Daniel and Ursula Schwarzenbach had the dream of planting their own…