Subway CEO John Chidsey has begun a multi-year journey to transform the world’s largest restaurant chain around the globe.

While Chidsey, former Burger King chairman, has been comfortable on the sidelines in recent years, the statistic that almost 90 percent of Americans live within a 10-minute drive of a Subway has reawakened his attention.

Like Burger King, labelled by some a floundering chain before Chidsey took over in 2006 and engineered a turnaround, Subway was trudging in neutral. The 56-year-old company, private its entire life, didn’t operate with any real sense of urgency, according to Chidsey.

Just weeks after Subway’s 50th anniversary in September 2015, co-founder Fred DeLuca, who started the brand when he was 17 in 1965, passed away. DeLuca, 67, battled leukaemia since 2013. Chidsey noted that Subway lost its way a bit. Perhaps not stuck in a malaise, exactly, but it lacked direction. Subway needed to figure out who it wanted to be in its next act.

Callouts from the brand’s analytics and insights teams sketched a clear roadmap. Subway needed to widen its lens and compete not just against other fast-food giants with scale—the McDonald’s, Wendy’s, and Burger Kings of the world—but also against emerging sandwich brands. 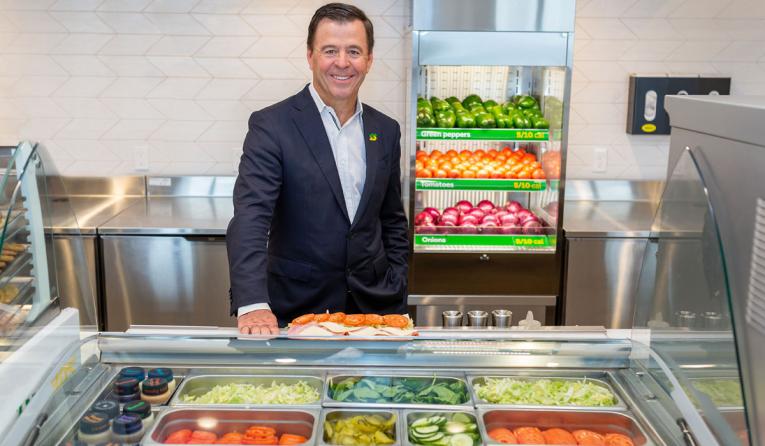 Subway’s consumer data was “overwhelming,” Chidsey said and pointed to what needed to change. More craveable options. More innovation. A quality-forward ethos that centres on the core.

The company rolled more than 20 significant menu updates across its U.S. system—what it calls the “Eat Fresh Refresh.” Based on records they could find this was the most extensive overhaul in brand history.

Unlike some past efforts, though, Subway built everything from the core out. It introduced 11 new and improved ingredients, six all-new or returning sandwiches, and four revamped signature options. A highlight being two new fresh-baked breads, Artisan Italian and Hearty Multigrain.

Subway quadrupled digital sales in 2020. A lot of that came from in-app improvements and attention to friction points. Subway rebuilt third-party delivery relationships. To the overall refresh, it worked on direct delivery where the aggregator takes care of the last mile.

This was essential, Chidsey said, to compete with McDonald’s, Wendy’s, Burger King, et al during the COVID clampdown. Subway only boasts about 1,000 drive-thrus out of its 20,000-plus venues.

“When I looked at the reels, it’s been quite a while since I think they were in the cultural zeitgeist and relevant,” commented Chidsey. “I can’t point to any one thing and go that’s it. But I think it was a lot of singles that added up to a lot of things.”

Here in New Zealand, Subway has been using unique marketing to keep Kiwis engaged, including floating a giant sub on lake Whakatipu. Recent campaigns have included bold billboards showcasing a larger-than-life view of the food, without a logo or brand name in sight.

“Judging by the response from locals so far, the iconic Footlong sub is well-known, well-loved and easily identifiable,” said Subway Head of Marketing, Rodica Titeica.

“Very few brands can showcase their products without context, and still manage to have fans recognising it, tagging their social media handles and wanting to know more.”

Not a soup and not a stock, bone broth is something better! Using a simple formula of time and quality ingredients, every batch of…