Kiwi chef Sam Heaven has proven he is a champion in the kitchen, after fending off tough competition from leading young chefs around New Zealand and Australia to win the coveted annual Nestlé Golden Chefs Hat Awards.

Sam who works at the Park Hyatt in Auckland blitzed the competition to win the prestigious award with a minimalist menu comprising an entrée of salt-baked onion, reconstructed chicken and butternut tart followed by a sour pear, umami caramel and CHEF Black Garlic Paste dessert. 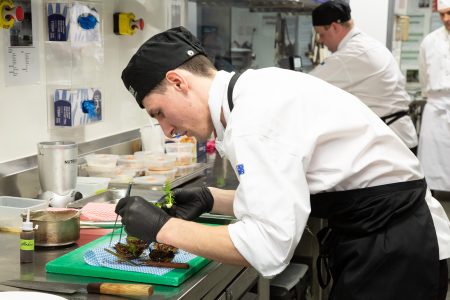 In a year like no other, a top 10 line-up of young chef talent from across New Zealand and Australia battled it out in a virtual grand final cook-off held across both countries to find the overall winner.

Representing New Zealand were Sam Heaven and Jamie Jackson from Christchurch who went head-to-head with top culinary talent from Australia.

Nestlé GOLDEN CHEF'S HAT AWARD is Australia’s longest-running culinary competition. It launched into New Zealand shores for the first time earlier this year just before lockdowns affected events and gatherings in both countries.

Despite the challenges, Nestlé Professional forged ahead pivoting to meet the fast-changing environment which allowed the competition to continue with a video entry selection process. The goal was to ensure that young chefs like Sam and Jamie could still put themselves to the test and elevate their careers.

“We promised to stand by our chef community, and we did exactly that. We were determined that lockdowns and travel restrictions wouldn’t stop us going ahead and the result was that we still attracted an outstanding level of chef talent who put themselves to the test and showcased their best dishes on camera,” commented Scott Stuckmann, Business Executive Officer Nestlé Professional.

Sam and Jamie represented the North and South Islands of New Zealand respectively, while the Australian competitors were selected from each state.

They competed under pressure in commercial kitchens creating the menus they had specially designed for the event. Two NZChefs judges or Australian Culinary Federation were onsite to taste their food. At the same time, the competitors’ efforts in the kitchen were beamed live across a virtual platform to a team of judges who watched and scored their skills and techniques.

Sam who takes away a cash prize of AUD$10,000 said he is elated with the win.

“This caps off an incredibly challenging time not only for me but for all the other young chefs across New Zealand and Australia who have had to deal with such difficult times. To achieve success in this event I had to park all the pressures of lockdowns, and forge ahead with an end game in mind of winning.”

Sam spent hours of his own time perfecting the menu he developed and making sure he was in top form for competition day. He was also awarded a gold medal at the event, while Cantabrian Jamie Jackson picked up bronze.

The Nestlé Golden Chef's Hat Award which has been around for 55 years exists to offer the next generation of young chef talent a platform to accelerate their culinary careers and become the culinary leaders of tomorrow.

The Award proudly partners with NZChefs and the Australian Culinary Federation, who share in the collective vision of being dedicated to the development of young chefs and the future of the industry.

New rules around the sale, supply and consumption of alcohol in Dunedin are expected to be in place early next year. The Alcohol Regulatory…