In celebration of its partnership with the 36th America’s Cup, Maison Mumm has unveiled a special limited-edition bottle for its iconic Mumm Grand Cordon cuvée.

The stunning pattern, designed especially by the Maison, highlights different shades of blue to symbolise the ocean, synonymous with the legendary racing that will set sail in Auckland later this year.

The limited-edition design complements the Maison’s revolutionary bottle design, introduced in 2018, which reinterprets the famous Cordon Rouge red sash. By a feat of technology, it has been transformed into a genuine red ribbon indented in the glass. 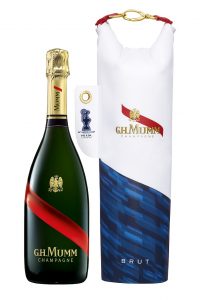 Maison Mumm will be featuring the limited-edition Grand Cordon cuvée bottle at their highly anticipated Mumm Yacht Club, located right in the heart of the America’s Cup Village on Auckland’s stunning Waitemata Harbour and Hauraki Gulf.

With doors opening to the public from mid-December, the official champagne partner will be present for all celebratory moments of the legendary race.

“Since it was established in 1827, Maison Mumm has always dared to be different and given its heritage, it is only natural that Maison Mumm should partner with one of the world’s most challenging sporting events,” said Kevin Mapson, Pernod Ricard Commercial Managing Director, the holding company of G.H.Mumm.

“An event that brings together the best athletes who have passion and constantly push boundaries, with the most advanced technology, in an ongoing pursuit of excellence and innovation. Values that Maison Mumm is recognised worldwide.”

To accompany the Mumm Grand Cordon limited edition cuvée bottle, the Maison has also created an exclusive reusable dry bag that features the same blue pattern. Beautifully crafted, functional, and lightweight, the bag protects gear and valuable objects, perfect for Kiwis heading out on the water this summer.

This is the second time in history that Maison Mumm has partnered with the America’s Cup, considered to be one of the most prestigious sporting events in the world.

Beginning in the 1970s, Maison Mumm has supported over 40 of the sport’s major competitions – including the 25th edition of the America’s Cup in 1983. As an icon of victory, the Maison has accompanied iconic navigators such as François Gabart and Armel Le Cléach onto the podium in their moments of triumph.

Today, Maison Mumm continues to support sailing’s courageous and passionate navigators who constantly challenge themselves by pushing the boundaries and embarking on new beginnings. There will be limited stock of the Mumm Grand Cordon cuvée America’s Cup bottles available now at leading retailers and select on-premise.